Sarah Brazytis on Lighten our Darkness 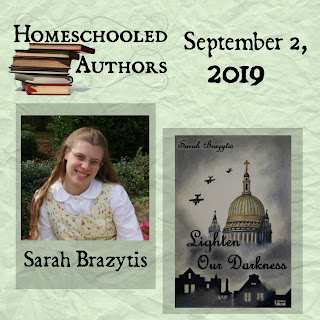 Sarah, Welcome back Homeschooled Authors. What have you been up to since you were last here (August 2016)?
Thank you for having me back! I’ve been doing a lot of writing, and just enough publishing - namely, the release of three new books, including Lighten Our Darkness!

What inspired your book, Lighten Our Darkness?
The first phrase of a prayer from the Book of Common Prayer: "Lighten our darkness, we beseech Thee, O Lord..." It sent me searching for the prayer itself, which so perfectly fit the challenges and fears of World War II! The idea of basing a story on it kept nagging at me, and as time went on, I found that the story itself began to form in my mind.

What was the most challenging aspect of writing this book?
The research was so incredibly intense! For a good part of the book, I was actually using a site operated by the Battle of Britain Historical Society that gave the weather, operations, and military action for each day. The comforting part of it was that you really can't go wrong with that much information; the hard part was the constant checking and rechecking to make sure I was staying on track!

Did you come across an interesting piece of information during your research that stuck out but couldn't work into your story?
The men of the Polish Air Force helped to save Britain…but after the war they were abandoned by the people who once lauded them as heroes. Far too many Polish aces were forced to return to a now Russian-controlled Poland, where far too many died in prison or were executed for perceived ‘treason’ or ‘war crimes’ against the Soviet government. Lighten Our Darkness does not extend that far in history, but it’s heart-breaking to think what men like Jedrick and Stan would have faced when the war was over.

What is Helen Smith's most unique quality?
Probably the fact that since her father was involved in international business, Helen is in essence a woman without a country. She's an American abroad, but was never really in one place long enough to settle in. It makes her both vulnerable, and the perfect friend for Jedrick, who is an old-world Pole whose world is no more - she knows what it is like to be alone and without family or community.

What is Jedrick's most irritating characteristic?
Well, I have to admit that my goal as an author is to make my characters as non-irritating as possible! But the trait that is one of his best - his dedication to his work - is what is also his greatest weakness: he knows what kind of fighting he's going into, and he knows he's going to die. He wants his death to bring as little sorrow to as few people as possible – so in his eyes, his life is over.

Resolution can be first cousin to obstinacy!

What is next for you as a writer?
More advertising for Lighten Our Darkness and my latest release, The Making of a Man; as well as publishing my next work, which should be coming out any week now.

Where can people get Lighten Our Darkness?
It's available on Amazon, as a Kindle eBook or a paperback.

Any final thoughts?
My favorite historical quote regarding the Polish pilots who fought in the Battle of Britain:

Had it not been for the magnificent material contributed by the Polish squadrons and their unsurpassed gallantry, I hesitate to say that the outcome of battle would have been the same.
Hugh Caswall Tremenheere Dowding,
1st Baron Dowding
Air Chief Marshal, Royal Air Force
Posted by Sarah Holman at 1:00 AM