Melissa Little on The Book of Secrets 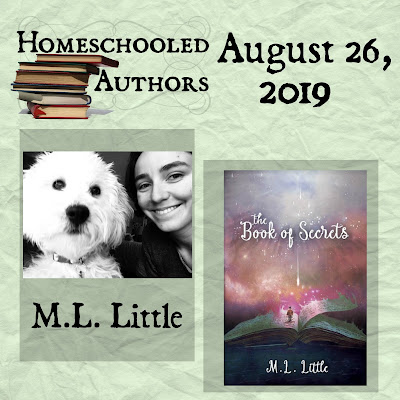 Melissa, welcome to Homeschool Authors! Tell us a little bit about yourself.
Hi! I've read your blog for awhile and I'm happy to be here! I live in Alabama near the Appalachian Mountains (something many people do not realize is in Alabama) and right on the edge of the woods. My author bio says I live in the woods, but this was met with disapproval from the 11-year-old I tutor, who demanded complete accuracy. So, for him, I will say I live on the edge of the woods. Unlike my characters, I don't live in the wilderness despite how all that sounds. I've been a little slower than most people to get through college but I'm almost done with my theology degree and I'm working to pay for grad school next year. I write for an online publication called Kid Lit Exchange, which enables me to get advanced copies of everything from picture books to YA novels. I also recently got Netflix and immediately hopped on the Stranger Things bandwagon.

Everyone’s homeshooling experience is different. What do you think made yours unique?
I think a lot of factors made my experience unique. Both of my parents are teachers (my dad has a doctorate in it). We didn't use one curriculum, but had a large blend of different ones. We did a lot of extracurricular activities. I was in plays and music and co-op classes. We moved several times when I was growing up and were in different groups or cover schools depending on where we were living. It was a very fun experience for me. I had a lot of friends and we went on tons of field trips.

How did being homeschooled prepare you to write?
Being homeschooled gave my brother and me a large amount of free time. We played together for hours and hours every day. We had these detailed families and storylines with our stuffed animals, who lived next door to each other in our fantasy world. That was actually the groundwork for the first stories I ever wrote. I also had so much time to read whatever I wanted. We went to the library all the time and I got so many books every week. I think being homeschooled gives you the gift of time and I used that time to eventually start writing.

What caused you to start writing?
When I was 9, my brother and I spent a whole day playing outside in these playhouses we had built out of scrap 2-by-4's. We had some kind of story going on with the stuffed animal characters we had made up. When we came inside that evening, I was struck with the inspiration to write down what we had played and turn it into a book. I got paper from my dad's printer, stapled it together, and began writing on the couch while my dad watched a foreign-language film on TV. Like a lot of my childhood, that moment is so vivid to me. I had no idea it was the start of something I would do for the rest of my life.

Part of the inspiration also came from my childhood with my brother, which I think will influence whatever I do for the rest of my life. For example, the Nullians (a creature group in the book) are actually something my brother invented when he was probably six. The Nullians living in a cave, the long trunks, the tide warnings--all of that was from my brother and me as kids. We had a computer game from the movie Cars and would always drive into a cave in the game and pretend we were in the Nullians' home.

Would you give us a synopsis?
Sure! Here's part of the back cover blurb:  After Gabriel Draven smuggles home the Stone of the Seven Realms, his fear of facing consequences launches him and his oddball family on a rollicking run for their lives across the world they only thought they knew. As his journey takes him out of his realm and into another, Gabriel discovers that the deepest mystery lies at the heart of his own family, and he must do whatever it takes to find his way back home.

Who will enjoy The Book of Secrets?
I call it a YA-crossover because I think it's marketed for ages 11-14 or younger kids who are more advanced readers. However, my hope is that anyone who wants an nontraditional, funny fantasy will enjoy it. I haven't read a lot of fantasy myself, which is kind of weird considering I wrote it, but I think most of it is boring. Hopefully, people who are tired of typical fantasy books will enjoy this one. I've had readers from age 8 to middle-aged adults.

Where can people buy your book?
It is currently available on Amazon, Barnes & Noble, and directly from the publisher at blackrosewriting.com.

Do you plan to write more books?
I'm in a bit of an inspiration drought currently but hope to come out of it eventually. The Book of Secrets has two sequels, which I am getting polished with plans to eventually submit them to my editor for consideration. But the world of traditional publishing is extremely unpredictable, so we'll just have to see.

Where can people connect with you online?
I have public Facebook page which I literally never use but if you're somehow that intent on finding me, you can just search my name. My often-used Instagram is @mllittleauthor and a great place to contact me. My scarcely-used Twitter is @mllittle4. I'm on Goodreads which is most easily discoverable by searching my name and my book's title. Finally, I have a blog where I interview authors and a website for my books.

Do you have any final thoughts?
This might have been more prevalent in my life than the average, because I grew up around a lot of educators, but I have faced prejudice both in real life and online because I was homeschooled. Often I'm careful to come across a certain way or avoid the topic of where I went to school. This is actually the first interview where I've mentioned it. I hope that I can prove where you go to school doesn't define you. I was able to get through college and become traditionally published, and if I can do it, so can any homeschooler. I hope to show people that truth. Parents know what's best for their kids and I don't think any kind of school--public, private, charter, online, or homeschool--is better than another.


a Rafflecopter giveaway
Posted by Sarah Holman at 1:00 AM