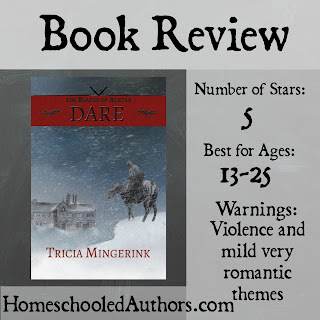 Buy it Here
Add to Goodreads Here
Description: Courage could cost him everything.
Third Blade Leith Torren never questions his orders or his loyalty to King Respen until an arrow wound and a prairie blizzard drive him to the doorstep of the girls whose family he once destroyed.
Their forbidden faith and ties to the Resistance could devastate their family a second time.
Survival depends on obedience, but freedom beckons. How far does he dare go to resist the king and his Blades?
No matter what Leith chooses, one thing is certain.
Someone will die.

I had my once-yearly urge to read a fantasy book. I am not a huge fantasy person. However, I have heard a lot about this book. My sister Mikayla hasn’t stopped talking about them since I asked the library to buy them so she could read them.

Mingerink has a great talent for creating characters that you instantly feel connected to. It didn’t take me many pages of the book to realize that. I quickly cared for Renna and Leith even when I didn’t know much about them. As the story progressed, I was emotionally pulled into their different struggles.

Mingerink also did a wonderful job with the world building. The culture is medieval in feel, but there were many pieces of culture like the blades, laws, and customs that were expressed so well that it took few words. Her talent reminded me of C.S. Lewis, who in the space of a paragraph made you feel as if you had grasped the culture of whatever mythical race you encountered.

I have only one minor issue with this story, and it wasn’t enough to even knock a star off. It seems very common these days to have a likable assassin in stories. One of the things authors fail to consider is the mindset of those who are in that kind of work. I really had a hard time believing that Leith ever committed any of the crimes he talks about; his personality didn’t match what he would have had to be. However, like I said, this was a minor point for me.

The faith aspect was wonderful. I love it in fantasy when they don’t try to make the faith allegorical. God is God, the scriptures are scriptures. Allegories about faith often get messy and are so easy to pick apart and find fault with.