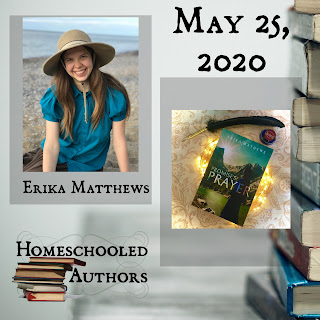 Erika, welcome to Homeschooled Authors! Tell us a little bit about yourself.
Thank you! I'm honored to be here. I write family-friendly Christian living books, both fiction and non-fiction, that demonstrate the power of the kingdom of God through ordinary people, transforming daily life into His resting life. I'm also a freelance editor. I live in the farm country of Minnesota with my husband and two young children. I was homeschooled K-12, then earned my Bachelor's in Communications at home before getting my Master's in Biblical Ministries from a tiny Bible school in Texas. Sharing Jesus Christ is my passion. I enjoy inspiring deep abiding relationships with God, reading, outdoor activities, music, organizing, and running my author and ministry website, restinglife.com

I recently read your book Promise's Prayer. What inspired the story?
Three thought processes converged to inspire Promise's Prayer. First, during my last few semesters at Bible school, God taught me so much about the power and importance of prayer. It is where relationship with God happens. The war of life is fought and won in the prayer closet. It is Jesus' mission - He ever lives to make intercession for us. It's our calling as priests. It's the purpose of holiness. I wanted to encapsulate some of what God had taught me in a fiction story. Second, I wanted to write a book that turned the typical "saving the world" plotline on its head in a Biblical way. I wanted to show what that could look like from an ultimate Biblical standpoint. Third, I wanted to challenge myself to write an adventure novel without any romance, violence, or magic. Combining these three ideas resulted in Promise's Prayer.

What are some interesting facts about Taerna (the country where Promise's Prayer is set)?
1. The only thing fictional about it is that it doesn't exist. :) It's completely realistic. Science, the laws of nature, the workings of God, and so forth are all in accordance with the real world.
2. Because autumn is my favorite season, I wanted to give Taerna (TAHR-na) a long, colorful autumn. Winter and summer are both very short and spring and autumn are both long.
3. Taerna is one of the Four Countries in their part of the world. To the west is the wild West Taernan Hills; to the east are three countries. Taerna gained independence from the southernmost one about 150 years before Promise's Prayer begins, and Taerna's now ruled by two kings together.
4. Taerna's considered "primitive" by surrounding countries, yet their advancement varies widely between the poorer and richer areas. The culture glorifies pleasure and is built around gratifying personal desires.
5. Adon Olam is Taerna's title for God. It's Hebrew for, roughly, "lord and master of eternity and of the universe extending far beyond the horizon." Taernan believers follow Yeshuah (Adon Olam's Son), read precious copies of the Book (the Bible), meet together for fellowship, begin mornings with prayer (usually outside, alone, or by a window if possible), and end prayers with "So be it, even so."

Any idea when we can expect the next book in the Truth from Taerna series?
Yes! I'm planning a summer 2020 release for Victory's Voice! In fact, I'm currently accepting beta readers. Now that all six books are written, my plan is to edit and release each one as quickly as possible. We'll see if that means a yearly release schedule or twice a year release schedule, in between mothering responsibilities and my non-fiction releases. I always give the latest book updates on Instagram and my newsletter.

Do you have a favorite character from the series?
Two of them. Liliora, Kaelan's four-year-old sister in Promise's Prayer. She's twenty-four in Book 4, Sustainer's Smile, and that's her story that touches on issues of life, value, and personhood that are very near to my heart - and I can't wait to share that book with the world. Liliora (unintentionally) has the same personality type as I do, and I relate to her so much. Also, I love Ellrick, the wise old friend. He's just grandfatherly and godly and everything wonderful. He might ask for a spin-off novella of his own one of these days...

Who is the targeted audience for this series?
First, Promise's Prayer wasn't supposed to be a series. But when NaNo writer's block hit hard on Day 2 the year after Promise's Prayer, I suddenly realized that my story fit perfectly for Carita's little sister. Then all Kaelan's siblings demanded their own stories... All that to say, the series matures. Promise's Prayer (main characters ages 19 and 20) and Victory's Voice (17) are targeted a bit younger. Surrender's Strength (20) is a step up, and Sustainer's Smile (24), Memory's Mind (29), and Romance's Rest (27) are targeted a bit older. Overall, the entire series is meant to be enjoyed by Christian readers of all ages who want to be challenged or encouraged in their relationship with God. It's something a family could comfortably read together. I've had young teens and folks in their sixties tell me they enjoyed Promise's Prayer. For younger readers, it's an interesting Christian story. For older readers, the books are meant to challenge them to think deeply about practical Biblical concepts that aren't always preached by today's church.

Any final thoughts?
The best advice I've ever been given for writing and for life goes back to the heart of our purpose: meditate on God's Word day and night. It comes with a no-fail guarantee of good success. As Christian authors, it's easy to write stories the way we think they ought to go, to work out our outlines and plot points on our own, to obsess and edit until our manuscript matches the image in our minds. However, "Except the Lord build the house [or write the book], they labor in vain that build it" (Psalm 127:1). This isn't just a quiet time in the morning, or a quick prayer for wisdom when we get stuck - it's a moment by moment relationship. It's fixing our minds on His Word day and night. It's learning to live a prayer - praying without ceasing. It's relying on God each moment. It's letting Christ live His life through us. It's seeking Him every moment as we type our stories or plan our plots. It's immersing ourselves in His Word so that it comes out in every aspect of our writing and our lives. As Brother Lawrence said, it's learning to practice the presence of God. That's true success, that's true life, and that's kingdom writing. 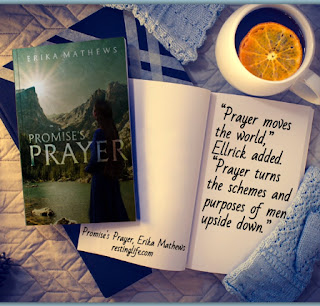