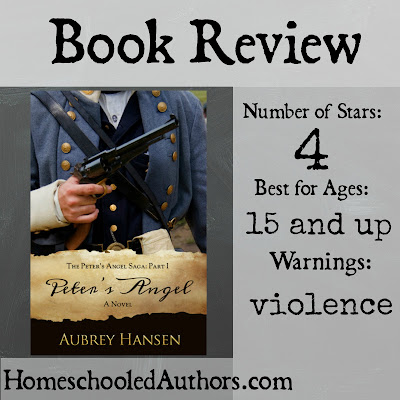 Buy it here
Add it to Goodreads
Description: In the wake of a lost War for Independence, Peter Jameson, a young colonel, struggles to protect his tiny patriot state of Rhode Island from the oppression of New Britain, the wealthy British duchy. When New Britain invades and attempts to seize Rhode Island’s newly-discovered mine, Peter finds himself leading his small cavalry against the massive British army. But war becomes the least of his worries when his own men kidnap him and hold him for ransom. Facing certain death, Peter is freed by a mysterious boy who vanishes without leaving his name. Indebted, Peter determines to find his "angel" and reward him. But his rescuer has a secret of his own—he is the exiled rightful heir of New Britain, and he will do anything to keep from being found.

Well, this was my first historical fantasy (a what-if genre, in this case what if the British had won the American Revolution) and it will probably be my last. Hansen has a lot of talent. Her style shines as it did in one of my all-time favorite books, Red Rain. However, I found as a lover of history, this genre just isn’t my cup of tea.

The first third of this book was a bit hard to get into and seemed to drag. I really didn’t feel connected to any of the characters. It wasn’t until tragedy struck the characters of both Edwin and Nathan that I really got into the book.

Peter was my least favorite of the whole cast. He was a nice guy, and I found a lot of admirable qualities about him. However, I just never felt connected with him. After he was kidnapped, he is so embarrassed and keeps acting as if everyone will turn on him because he was so stupid as to get kidnapped. I really wanted to slap him and then yell that the people who would blame him for being kidnapped were not the type of people you want to listen to.

Edwin’s story was the most heart-breaking one and the one I most enjoyed. His love for his family, his faith, and his determination were all believable. Nathan also tugged at my heart, especially toward the end of the book.

The writing is stellar. I might not have added this to my favorites shelf, but that is only because of personal preferences. The writing was amazing and the story structure was wonderful.

The hardest thing about this book is that it leaves you hanging, and the second book hasn’t been released, nor does the author seem to have a release date set. I would hesitate to recommend anyone to get into this series until we are sure the author plans to complete the trilogy.

I recommend this book to those who enjoy what-if scenarios, strong writing, and well-rounded characters.