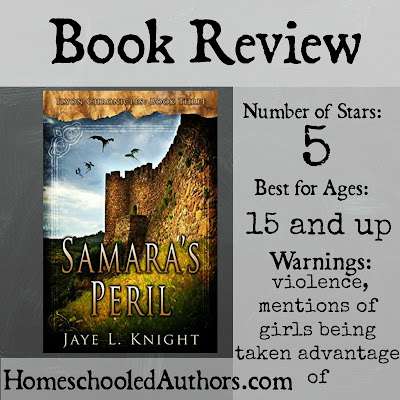 Buy it here
Add it to Goodreads
Description: When news arrives that Emperor Daican has been in contact with his chief war strategist, it signals potential doom for the country of Samara. Determined to intervene, the resistance in Landale, headed by Lady Anne, embark on a covert mission in hopes of unearthing further information. However, a shocking discovery leads to complications no one could have foreseen. Armed with their newfound knowledge, they set out for Samara to warn the king. War is inevitable, and they must face two desperate battles--one on the walls of Samara's great stronghold, and the other on the battlefield of Jace's heart, where victory might only be achievable through great sacrifice.

Was this book as good as The King’s Scrolls? No. Was it amazing? Yes!

The characters are, of course, some of my favorites in all of literature: The brave Kyrin who continues to help the resistance as they fight to protect those that would harm them. Her large family is so dear and wonderful, from her twin to her little sister. Jace of course rips at my heart and makes me wish I could sit across from him and explain God’s amazing love.

This book had far more allegorical elements in it (the story of Jesus), which is partly I think why it was a weaker book, as they felt like they were tacked onto the story in places. This isn’t to say it was a weak book, just not as strong as Resistance and The King’s Scrolls.

The plot for this book held some of the same struggles, yet was new and fresh. Nothing felt repeated from the last two books in regards to the main plot, and actually it felt very nice for the whole book not to be about Kyrin staying out of the hands of the Emperor. There were many tense moments that made me hold my breath.

I will not give anything away, but I loved what this book did for Jace. After two books of somewhat the same struggles, the change was very welcome. I wish I could say more, but then it would give away some of the book.

I highly recommend this book for those who like non-magical fantasy, books that make you feel many emotions, and those looking for a great series to become attached to.