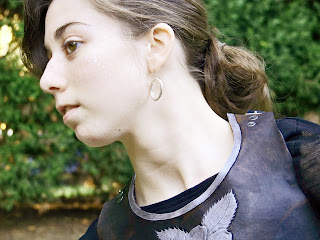 How did being homeschooled prepare you as a writer?
Being homeschooled doesn’t necessarily mean I had a fluid schedule.  My mother kept us at our work until the school-day let out at three in the afternoon.  However, our curriculum was heavily book-based and required a lot of reading, largely from historical novels, oftentimes from textbooks.  Additionally, my father has always been an avid reader.  Books and the love of reading books were always around us.
These factors, coupled with my personality, started me writing at an early age.  Oddly enough, I detested my English courses and never progressed far in them; what I lacked in cold grammatical knowledge I made up intuitively by learning how to construct sentences, paragraphs, and ultimately stories from the authors I read for school.
What inspired you to start writing?
The English civil war.  My imaginary friend as a child was Oliver Cromwell, my real friend was the boy who would one day grow up to become my husband.  I mixed these two with an overpowering dosage of fantasy and began writing the most outlandish stories.
What is The Shadow Things about? 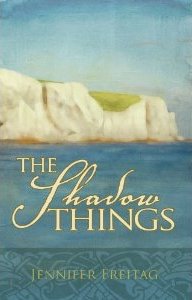 Not the English civil war, nor fantasy, but it is based in England and it is definitely about faith.  I went clear back to the age of Britain after the fall of the Roman Empire (which, incidentally, was also made interesting to me by my homeschooling) and took up the story of Indi, a young British tribesman struggling to find the truth in his pagan gods and learning to suffer for the cause of Christ.  It is perhaps not exactly a happy story, but I sincerely hope it is a joyful and truthful one.
Where can people get your book?
There is one on my bookshelf, but that is mine.  If you want a copy of your own you can go on Amazon, or check your local bookstore, or buy it off my blog at The Penslayer—that way you can get an autographed copy!
Do you plan to write anymore books?
I have one more book in the editing stage, and one in the writing stage, and gobs more unwritten in my head.  When I die I will probably go out with an unfinished manuscript under my fallen forehead and people will be most distressed with me.
Do you have any final thoughts you would like to share?
I read a quote by Voltaire once which went “To hold a pen is to be at war.”  Not being intimately acquainted with Voltaire I do not know precisely what he meant, but my own pen knows what it is like to be at war.  The Shadow Things is not a book which is likely to be widely popular.  It isn’t fuzzy, it isn’t romantic; it can be grim and stark and sometimes jarring—even for me.  When I took it upon myself to write The Shadow Things I wanted, not to write a happy story, but a true one, one about faith and bearing one’s cross and the reality of the forces of darkness which truly hate the light.  I had a prevailing disbelief in the forces of darkness and the Kingdom of Heaven to war against with my little pen.  I am still warring against it.  It isn’t popular and it can be discouraging, but they do say the pen is mightier than the sword, and I am told the truth will set men free.
Posted by Sarah Holman at 3:00 AM