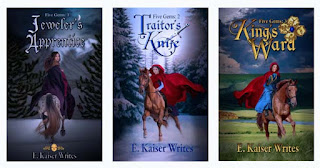 What do you think the most impactful aspect of King's Ward is?
Rebekah: Fia never gives up, no matter how hard her life gets. And that was pretty cool to watch, don't you think?

Kelsey: Yes! I think that was the most impacting aspect of the book, too. Fia comes across as an ordinary girl, like the rest of us, and yet she holds fast to her duty and to what is right and that turns into extraordinary results. Pretty inspiring!

About the depth of King's Ward... Fia goes through really hard things. I can't say too much and give away the plot, but just the beginning where she has to leave all that's familiar would be a difficult situation for anyone. And that's the easiest situation she faces. The others get progressively more serious, even life-or-death. But she deals with each one in stride, even though they're overwhelming. She relies on God. King's Ward is deep because it delves into her mind and heart as she learns to overcome.


What was your favorite aspect?
Rebekah: My favorite aspect of King's Ward is the setting with the grasslands and the village. I also loved that Fia is starting to step out into her role as something like a spy.

Kelsey: I have to give two of my favorite aspects just like you did, Rebekah. And they're very similar to yours. One is the wonderful world-building. Erlandia is a Hungarian-esque horse nation on the grasslands and feels so real! Then I also loved Fia's development and her interactions with her friends and family. I'm curious, Rebekah, what was your favorite part of the Erlandian culture? Mine was the way they rode so many horses at one time!

Rebekah: The horses thing was definitely cool! I just loved the horsey-ness of the culture--the cavalry, the rodeo-like competitions, how easily and how well the people ride them. It was pretty epic. I also loved their clothes--I know that sounds shallow, but I grew up with a Hungarian book with illustrations and so the clothes at the festival in King's Ward brought back images of those dresses and jackets and it was kind of nostalgic.


What did you think of the villain?
Rebekah: The villain. . . is a creep. A complete and total creep. But deep down inside me I felt sorry for him. There were a lot of feels involved. This story really shows that there is just no joy in seeing even the worst villains get their due.

Kelsey: I was rather dismayed to see the villain up to his tricks again. He's so good at getting out of binds that until the last, I wasn't sure what would happen with him. And I know what you mean, Rebekah, I did feel a little sorry for him. Fia's thoughts about him showed how his deluding of himself caused so many problems, which is a warning for the rest of us. I can't help but think about what he could have been like if he had chosen to take the right path for his life.

Rebekah: Yes, the story definitely leaves us with things to think about, as well as being a fun and enjoyable story.