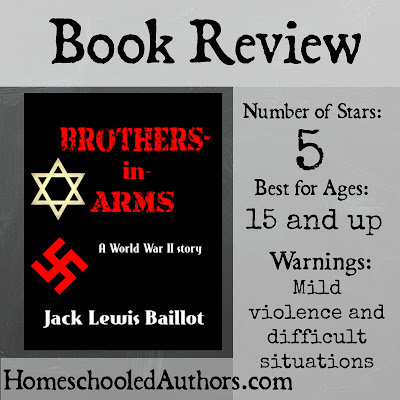 Buy it here
Add it on Goodreads

Description: Franz Kappel and Japhet Buchanan never expected their friendship to be tested by the Third Reich. Friends from early childhood, the boys form an inseparable, brotherly bond. Growing up in a little German village, they escape most of the struggles of war until the day Japhet is banished from school for being a Jew, and later has a rib broken when other village boys beat him up. Franz learns he is putting himself in danger for spending so much time with Japhet but continues to stand up for his Jewish friend even at the risk to himself. Then one day their lives are shattered when they see first-hand that the price of being a Jew is dangerously high.
With the war now on their doorsteps, Franz and Japhet come up with a desperate plan to save their families and get them out of Germany alive. Leaving behind the lives they've always known, they move into Berlin with nothing to protect them but forged papers and each other. Convinced their friendship can keep them going, the boys try and make a new life for themselves while trying to keep their true identities and Japhet's heritage a secret. Taking his best friend's safety upon himself, Franz joins the Nazis in an attempt to get valuable information. At the same time, Japhet joins the Jewish Resistance, neither friend telling the other of their new occupations.
With everyone in their world telling them a Nazi and a Jew can't be friends, it is only a matter of time before they believe all the lies themselves, until neither is certain if they are fighting against a race of people or fighting for their homeland. Somehow they have to survive the horrors of World War II, even when all of Germany seems to be against them.

When Baillot asked if I would be an advanced reader for her book, I said yes, because I like most Christian historical fiction. I was not prepared to be totally blown away by the story. It is by far the best book I have read that captures the emotions within Germany during World War II.

Right away, this book sets itself apart from most because both of the main characters are boys (one Jew, one non-Jew), and the story is about their friendship. Love interests are almost non-existent throughout the whole book. The friendship between the two boys is so deep, the characters so real, that it carries the story to the very ending.

The setting and plot of this book made it a heart-pounding gut-wrenching book. I am pretty sure there were a couple of places where I cried, it was such an emotional journey. I had to stop reading it at least an hour before I wanted to go to sleep so that I had plenty of time for my emotions to right themselves. Yes, it was that powerful.

The Christian message seemed to be absent from the book in the beginning, and in the middle I felt desperate for it (as the characters were). When it finally appeared, it was that much more powerful. It packed a punch not only for me, but for the characters. It was yet another aspect of the book that I was amazed at.

The writing was strong, as strong as any book I have ever read. I can tell that Baillot spent many hours researching because it showed in the story. Everything from major events to tiny details of everyday living in Berlin seemed to make the time come alive.

I cannot say enough good about this book and highly recommend it for history lovers, those who love powerful stories, and World War II buffs.