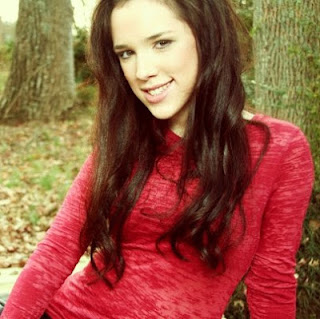 Tessa, welcome to Homeschool Authors! Tell us a little bit about yourself.
I'm an 18-year-old coffeeholic and author of Purple Moon, my YA Christian fiction novel to be published spring 2013 by Lighthouse Publishing of the Carolinas. I am also the editor over the faith department for Temperance Magazine, a column writer for Whole Magazine, as well as a contributing writer for Imagine Mag. I love God, acting, music, Starbucks, and my imperial Shih Tzuâ€”who is named Brewer after a character in my book, as well as my love for coffee

What was your favorite part of being homeschooled?
I seriously loved everything about being homeschooled: being able to create my own schedule (which included writing), doing school in my pajamas, going to the library or a coffee shop for a change of location, and being able to work on my own pace. I'm more of an introvert, so it was also nice being by myself rather than surrounded by extroverts seven hours a day.

What inspired you to write Purple Moon?
I wanted to write a story about a girl who used to know God as a child, but over the years began falling away from him because of a broken family and crushed dreams. It was inspired by the song "By Your Side" by Tenth Avenue North, as well as the skit to "Everything" by Lifehouse (which you can view here).

What is it about?
I'm horrible at summing up the story in just a few sentences. How about I give you the back cover blurb instead? It's only the first draft, but hopefully it'll give everyone an idea of what the story is about:
Selena’s life isn’t turning out to be the fairytale she imagined as a kid. That hope seemed to vanish long ago when her dad—a preacher—kicked her and her mom out of the house. This summer might finally hold the chance of a new beginning for Selena… but having to live with her snobby cousin in Lake Lure, NC while waiting for her mom to get out of rehab wasn’t how Selena was planning on spending her summer. She soon begins to wonder why she committed to give up her “bad habits” for this.

Things don’t seem too bad, though. Especially when Selena gains the attention of the cute neighbor next door. But when her best friend back home in Brooklyn desperately needs her, a secret that’s been hidden from Selena for years is revealed, and when she becomes a target for one of her cousin’s nasty pranks, she finds herself having to face the scars from her past and the memories that come along with them. Will she follow her mom’s example in running away, or trust that God still has a fairytale life written just for her?

How did you land your book contact?
I went to my first writer's conference when I was 16-years-old with the first three chapters of Purple Moon. I didn't actually schedule an appointment with an agent or an editor since there wasn't anyone who was looking for YA at the time. However, as I was having a meeting with an editor for Ibegat--a Christian teen website--a man came up to me and asked to see the first chapter of my manuscript. After my appointment, he wanted to know more about Purple Moon and seemed very interested. He told me that he was the Acquisition Editor at Lighthouse Publishing of the Carolinas (the book division for Ibegat & Christian Devotions), and gave me his email so I could send him the next chapters. A few months went by and eventually he ended up offering me a contract. After careful consideration and much prayer, in March 2011 I signed my first book contract with Lighthouse Publishing of the Carolinas. It was very exciting to say the least!

Who will like this book?
Any teenager who can relate to Selena and the struggles she's had to face, such as insecurity, anxiety, crushed dreams, a broken family, etc. She's an artist as well as a dreamer, wishing that life could have turned out to be the fairytale she imagined when growing up in Kentucky. Since it's a contemporary novel, it deals with issues that teenagers have to face almost every day. Some Christian authors often try to steer away from presenting these kind of topics in YA books, however I believe it's a powerful way to really minister to teenagers and get on their level.
What is your favorite book or author and why?
I absolutely love the Christy Miller Series by Robin Jones Gunn. These books were a big part of the reason why I was inspired to write my own series as well. Some other favorites of mine include: Redeeming Love by Francine Rivers, Caleb + Kate by Cindy Coloma, Glass Girl by Laura Kurk, and basically anything that is written by Karen Kingsbury.

Are you planning on writing more books?
This is what I want to do for the rest of my life, so yes. Definitely. I'm currently working on the first draft for my next book. I'm also hoping to turn Purple Moon into a 3-book series in the future, and possibly write a Purple Moon spin-off series as well. I get a new book idea almost every day, and I'm not even exaggerating. If only I could just write a bit faster...

Do you have any final thoughts?
I want to leave you all with a verse I found when I was 15 that has encouraged me to pursue my dreams as a teenager, but to make sure that I'm keeping God first.
"You who are young, make the most of your youth. Relish your youthful vigor. Follow the impulses of your heart. If something looks good to you, pursue it. But know that not just anything goes; You have to answer to God for every last bit of it."
~Ecclesiastes 11:9 (MSG)
Thank you for the interview, Sarah!

You are very welcome, Tessa!
Posted by Sarah Holman at 3:00 AM