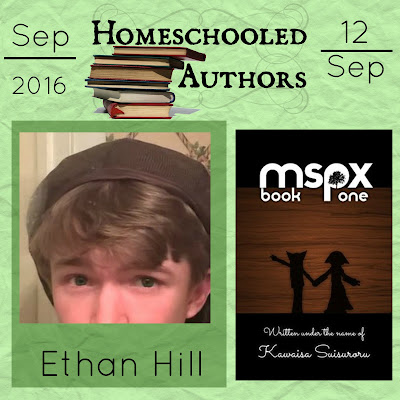 Ethan, welcome to Homeschool Authors! Tell us a little bit about yourself.
Sallo! My name is E. Howard Hill. I've been homeschooled off and on since Kindergarten, and I love every second of it. I live in the middle of nowhere, and I enjoy this fact as well. I'm the oldest of four siblings, two brothers and two sisters.

I'm a truth-seeker, and that's, to be honest, the only title I'm proud of. When it comes to my other titles, however... I'm a writer, musician, fanboy, animator, artist, photographer, computer programmer, graphic designer, snow cone-maker, and a list finisher (like right now). For fun, I enjoy taking care of rabbits, writing, photographing food, more writing, taking apart computers, writing, playing guitar, and writing. Have I mentioned that I like writing? I've written one novel so far, previously operated two YouTube channels, earned a Photoshop certification, survived a year of public school, and have jumped on the same platform in Doodle Jump over two-hundred times. Additionally, I have completed all of the levels in Tetris for the original GameBoy.

As mentioned before, I'm a fanboy. I'm a fan of The Neverhood, Sonic the Hedgehog, Over the Garden Wall, Fantastic Mr. Fox, Doctor Who, Lord of the Rings, Star Trek, Star Wars, Harry Potter, Microsoft, the Ender Series (especially 'Speaker for the Dead',) Portal, and almost any Pixar film (except for The Good Dinosaur, Brave, and Cars 2).

Now to the next questions!

Everyone’s homeshooling experience is different. What do you think made yours unique?
When I was very little, I loved words. In fact, when I was in kindergarten (I attended East Texas Christian School for half of the year), my teacher requested that I be homeschooled because I was already reading third grade readers. Ever since then, I've loved being homeschooled. Some of my very best friends are homeschooled, and I'm a proud member of CHEC. Not to say that I haven't tried other options, I attended Union Grove High School for my freshman year of high school, but I'm not intending on returning any time soon. So there, that's my story... so far.

How did being homeschooled prepare you to write?
As every writer knows, you write what you know. Because my field of view has been substantially broadened through my experience as a homeschooler, I believe that I've been able to experiment with incredibly diverse topics. Not only have I been given the opportunity to hone down on grammar, but I've been able to read and comprehend works from Homer's Odyssey to Homer Price. It's helped my life and assisted to my well-rounded-ness (if that isn't a word, I think it should be), and it's drastically made my writing less cookie-cutter.

What caused you to start writing?
Everyone has a story. Everyone, no matter who you are. It's not a fictional story, but everyone has been given a life thanks to the Lord complete with characters, setting, backstory, and his or her own personal role to play. In a way, we're all editors, as the Lord writes our lives and we're given our own parts to play inside of it. This realization made me want to write. Plus, it was more productive than photographing food and hacking into Linux.


What inspired MSPX?
It's a long and complicated story as to how I got the idea for MSPX, in fact, it's so long that I might even write a book on it. However, to summarize it for all of you awesome people, I'll just admit that, believe it or not, but it's an incredibly personal story. MSPX is loosely based, in the environment, off of a variety of ideas, included but not limited to Orson Scott Card's "Speaker for the Dead", Doctor Who, music from bands such as alt-J, MGMT, Owl City, Wax Tailor, and the Dire Straits, the Archie Sonic the Hedgehog comic series, Disney's "The Fox and the Hound", American politics, Lord of the Rings, Portal 2, a few really cool Windows 7 background pictures I found, the "Tarin Wanderer" series by Lloyd Alexander, Fantastic Mr. Fox (the movie), Over the Garden Wall (the television series), and people I know in real life.

Would you give us a synopsis?
It's the year 2237. In the twenty-first century, an epidemic hit known as the Zenith, a virus that affected humanity so badly that only a few thousand scientists and a race of genetic mutants, known as chimeras, managed to survive. However, it's been two-hundred years since then, and after two wars have been fought, we've finally come to the (relatively) stable Kingdom of Quercasia.

The first book, like the next two, is a snapshot of two weeks out of the lives of two people, Tod Washington and Sylvia LeBeouf. They're both chimeras, they're both aristocrats, and they're both fifteen. However, they're also very different. Tod is an orphaned red fox chimera and lives by himself in a ratty, old apartment complex that once was owned by his late godfather, Winsor "Seattle" Washington. As for Sylvia, she's currently an Artificial Intelligence and is trying to find a way to become a real girl again (think Pinocchio, but in this case, she used to be a real girl when she was young).

I won't spoil any more. No worries. Though it sounds kind of depressing, I've been told that it has its fun moments.

Who will enjoy MSPX?
The best answer to this question is... well... to be honest, I have no idea! I didn't exactly write this with any one specific audience member in mind. In fact, I've been told by a friend of my cousin, who is a lady in her sixties, that both she and her twelve-year-old grandson enjoyed the work. If you're a Science Fiction fan, you'll enjoy the realism I presented in every aspect of the book. If you're a fantasy fan, you'll enjoy all of the bizarre, rich landscapes and characters I've painted. If you're a fan of romance, you'll probably enjoy the clean, wholesome (but still adorable, I've been told by friends) self-sacrifice I've turned into a plot. If you like action or mystery, I've included that too. This work, no joke, was as hard to label as it was to name.

Do you plan to write more books?
Without a shadow of a doubt, yes! The second book, which I believe is better than the first, will be released sometime in late 2016. And then, who knows? Maybe after my trilogy is uploaded, I'll go back to photographing food.

Where can people connect with you online?
You can find me on Wattpad, my website, my Amazon author page, and on Blurb.

Do you have any final thoughts?
In case you're wondering, yes. Tod is based off of me, like, heavily, and I am an enormous Microsoft fan. Oh! Also, I don't care what people say, Yellow is a good color... and stuff. Just saying. As for an inspirational message, it has come to my knowledge that, perhaps, people will be checking this section to learn how to not repeat the mistakes I made. Here is my advice to aspiring authors:

- Lather, rinse, repeat.
- Eat fruits and vegetables.
- Make sure to keep your mouth closed when you're underwater.
- Sleep is important, make sure to do it for at least ten minutes everyday.
- Take frequent breaks from having to take breaks.
- When driving, make sure that you're facing the windshield.
- It's easier to walk on your feet instead of your hands.
- Teeth only come out once. If a permanent tooth is loose, that's not good.
- Never go to Disney.com without your parent's permission.
- Microwaves and eggs don't go together.
- Do not be a tree-hugger during a lightning storm.
- Even if it's organic, food that is several years old is probably bad.
- Squirrels and cigarettes are alike in one way: bad things happen when you light them and put them in your mouth.
Posted by Sarah Holman at 3:00 AM