Interview with Kelsey on Suit and Suitability 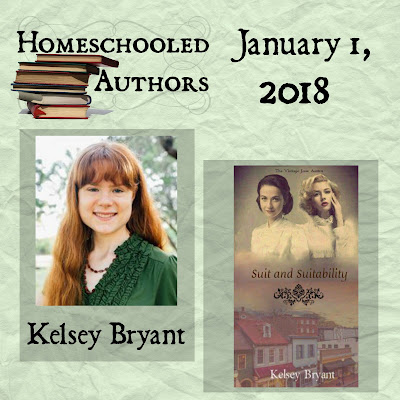 Kelsey, welcome to Homeschooled Authors once again. What have you been up to since last time you were here?
Thank you for having me! The last time I was here was over two years ago, after I had published England Adventure (Six Cousins Book 2). Almost that entire time, I was working on Suit and Suitability. I’ve traveled to some interesting places (England and Prince Edward Island, for two), gotten into freelance copyediting, and been enjoying a new member of the family (a nephew).

How did you become involved with the Vintage Jane Austen Project?
One day, Hannah Scheele (the series’ cover designer) and Sarah Holman (the author of Emmeline) were talking and somehow formed the scheme for the Vintage Jane Austen Project. Knowing me well as a Janeite, they asked if I wanted to write one of the books. I have hardly ever felt more excited to say yes!

What was your favorite part about moving an old story into a new time period?
I think it was discovering how personalities from Regency England (c. 1811) could be adapted into 1930s versions of themselves. For example, responsible, hardworking, organized Elinor Dashwood (who is Ellen Dashiell in my novel) made a perfect secretary, one of the steadiest jobs available to women during the Great Depression. Romantic, passionate Marianne Dashwood, her sister (aka, Marion Dashiell), would unequivocally be an aspiring actress in the days when girls like her dreamed of becoming Hollywood or Broadway starlets.

What was the most challenging part of this project?
Well, besides the normal frustrations of tying up all the threads and actually weaving Suit and Suitability into a cohesive, satisfying novel, I would say Marion’s character was the most challenging. (Which is quite appropriate, as she is the most challenging person that her family knows, too.) I wanted her to be liked by at least some readers, but I also didn’t want to diminish her personality. Writing her was a tricky balancing act. Also, some of her interests, such as the way Broadway worked in the 1930s, were rather difficult to ferret out details for accurate portrayal. But she and I made it through okay, and I love her as much as I love Ellen, even if I still don’t relate to her as well.

What Jane Austen character are you most like?
I’d like to think I’m most like Elinor Dashwood, but maybe that’s because I just want to be! I do share a few traits with her, such as her carefulness and her reserve, but I also see myself in Fanny Price, who is shy and unsure of herself sometimes.

Which one of the characters in Suit and Suitability are you most like?
Since this narrows down the options, I can unhesitatingly say Ellen Dashiell. Even then we aren’t extremely alike; she’s more competent, more organized, and more of a workaholic. But I used large pieces of my personality to inform hers.

Tell us the synopsis for Suit and Suitability.
The mystery surrounding their father’s criminal accusations is almost as hard to solve as the many puzzles springing on their hearts.

Canton, Ohio, 1935. Ellen and Marion Dashiell’s world crumbles when their father is sent to prison. Forced to relocate to a small town, what is left of their family faces a new reality where survival overshadows dreams. Sensible Ellen, struggling to hold the family together, is parted from the man she’s just learning to love, while headstrong Marion fears she will never be the actress she aspires to be. When a dashing hero enters the scene, things only grow more complicated. But could a third man hold the key to the restoration and happiness of the Dashiell family?

Where can people get it?
Suit and Suitability is available from Amazon as a paperback or eBook.

To leave us off, please share a quote from your story.
May I share two quotes? One is a quote (out of Ellen’s thoughts), the other is more of an excerpt (out of Marion’s thoughts).

“Fictional mysteries were well and good, but in one’s own life they were a nuisance.”

“Marion slipped slowly, purposefully, from room to room of the house, her footsteps echoing on the wood floors and every door opening and closing with a heightened click. The emptiness was eerie, like her childhood memories had been burglarized and she was left with only their ghosts. Her room seemed a stranger, all of its furniture gone: her little-girl vanity, her bookshelf, her dresser, her reading chair. It had been a dream house…”