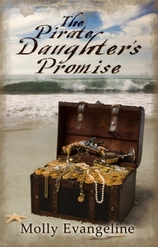 Buy it Here
Age Appropriate for: 10 and up (mild violence and mild romance)

Description: Orphaned at a young age, Skylar McHenry grew up as little more than a servant and shunned by everyone around her because of her reputation as a pirate's daughter. Each day Skye faces is marked by some new struggle. Her only hope is to rely on her heavenly Father's care and comfort and the solace of her best friend, Will, who has become more than dear to her.
Just when an unexpected encounter gives Skye a small glimmer of hope that things might change in her favor, her world is shattered. She is awakened in the night by cannon blasts. Pirates storm the orphanage, drag her away, and force her aboard their ship. The cruel captain's intentions are clear. He will extract from her, through any means necessary, the location of the treasure hidden by her father. For Skye to divulge the location would mean breaking the last promise she made to him. She's certain she never will, but what happens when the lives of those dearest to her are at stake? The Pirate Daughter's Promise is full of daring high seas adventure; sweet, wholesome romance; surprising discoveries; unlikely new friends; and the rewards of trusting in God even when life seems impossible.

When Molly agreed to do an interview for Homeschool authors, I went to her website to do some research. When I saw that The Pirate Daughter’s Promise was only 99 cents, I decided to buy it.  I am so glad I did.
From the gripping opening to the final, touching page, I was enthralled with Skyler's story. Orphaned and with only two friends in the world, Skyler leads a hard life.  She keeps a secret her father had made her promise not to reveal until she finds someone who loves her and she trusts completely.  A secret concerning a hidden pirate treasure.

I was skeptical when I began this book, as I have never really liked pirate stories.  As a lover of history, I had learned too much about pirates to ever think of them as good guys in films or books.  I was delightfully surprised at this book.  This was not about a “Christian” pirate, nor was piracy shown as acceptable.  The good captain and his crew hunt pirates and return the stolen goods.

I loved the faith and morals displayed in The Pirate Daughter’s Promise.  Prayer not only is a normal part of life, it works.  The romance will stand up to the highest moral standards.  This book is very wholesome and refreshing.

If you are looking for a book full of adventure that is faith building, The Pirate Daughter’s Promise is a wonderful choice.

Was this review helpful? Vote it up on Amazon

Other reviews of books by Molly Evangeline on Homeschool Authors

Every Tear
Truth
Posted by Sarah Holman at 3:00 AM