Daniel Mount on The Faith of America's Presidents 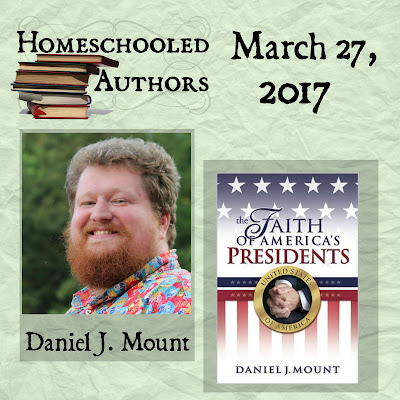 Daniel, welcome to Homeschool Authors! Tell us a little bit about yourself.
Thanks for the opportunity! I'm a website designer by day and an author and songwriter in my off hours. I also love playing piano; I was a church pianist for eight years in my teens and early twenties.

Everyone’s homeschooling experience is different. What do you think made yours unique?
When I was fairly young, my parents heard a message called "Delight-Directed Learning" by Gregg Harris. The concept was to find an area that a child is already interested in, and connect those areas of interest to academics. It was pretty obvious by the time I was nine or ten that I loved history, so I ended up doing history-related projects as English and History assignments.

How did being homeschooled prepare you to write?
I doubt I would have become a writer were it not for my parents assigning me writing projects on topics I was interested in. I found run-of-the-mill essay topics in college as boring as anyone else! But I loved writing about topics that I loved.

What caused you to start writing?
I started my first major writing project when I was nine or ten. It was an aviation history newsletter that I put out for eight years, six times a year. About the time I started, I went to church with a B-17 tail gunner and a P-47 fighter pilot. They started telling me their stories, and I was fascinated! I started interviewing them and writing book reviews. I did that until I was eighteen or so, when college and a book project ended up taking precedence.

What inspired The Faith of America's Presidents?
As a teen in my high school years, I decided to try to find a book on the presidents, with a chapter on each president's faith. I found a number of related books, but I couldn't find anything that was current and focused on a president's personal faith and doctrine. So I decided to write one.

Would you give us a synopsis?
Sure! There's a chapter for each president from George Washington through George W. Bush. (It came out in 2007. I'm currently working on a second edition, updated and revised.) The primary focus for each chapter is the president's personal faith, both in piety and in doctrinal orthodoxy. For presidents where it's particularly relevant, I do examine how their faith impacted their presidencies.

Who will enjoy The Faith of America's Presidents?
Over the last ten years, I've found that most of the people who really liked it were pastors, homeschooling parents, or homeschooled students. Just because of its length, it tends to appeal to readers around 12 and up, though I do have one friend whose particularly precocious younger brother read it cover-to-cover at around age eight!
Most read selected chapters on the presidents that most interest them.

Do you plan to write more books?
Yes. In fact, I already have! Several years ago, I worked with Dianne Wilkinson, one of the most acclaimed songwriters of all time in Southern Gospel music, on her autobiography. It's called Dianne Wilkinson: The Life and Times of a Gospel Songwriter. I did a series of extensive interviews and turned it into the book.

Currently, my primary book project is a second edition of The Faith of America's Presidents. Also, over the last few years, I've been slowly collecting notes and writing preliminary drafts on books on several topics, including the history of the text of the Greek New Testament and principles for how Christians should communicate in this internet/blog/social media era.

Where can people connect with you online?
My main website is https://danielmount.com/. I post songs I write at https://tomorrowshymns.com/. Finally, I launched https://expositorysongs.com/ last year after about five years of research. That site's concept is finding songs where the main idea of the song matches the main idea of a passage of Scripture. Presently I have songs from Romans - Philippians posted; I'm going through two chapters per week.

As far as social media, I use Facebook and Instagram mainly for keeping up with close friends and family. My only public account is on Twitter: https://twitter.com/danieljmount I left Twitter several years ago; I just returned a few days ago to set up an account so I could have something accessible to the public.

You know, I don't have any burning desire to be famous. I'm perfectly happy to work on my writing projects in peace and quiet. I've been close enough to various celebrities in various fields to know that it's not for me. It's my ambition to lead a quiet and peaceable life, and hopefully, once in a while, write something that's worth its readers' time.

Do you have any final thoughts?
Thank you for doing this website! It's a cool concept. It was neat to be browsing the Internet the other day and stumble across your post on my book. But it's even more neat to take part in your interview series. Thank you for this opportunity!
Posted by Sarah Holman at 1:32 PM