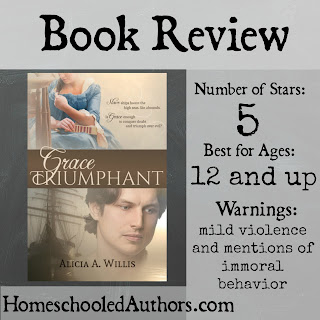 Description: Profligate London, 1788. Slave ships haunt the seas, bearing human cargos to further the wealth of the rich and destroy the souls of the slave traffickers.
Russell Lawrence is an avid skeptic. Captain of the slave ship Barbados, wealthy, and a respected leader, he views religion as a crutch for the weak. But when the debauchery of the slave trade begins to destroy his good morals, his battle becomes more than fighting pirates and mutineers. What if there really is a God?
Impressed as a cabin boy, Jack Dunbar sees his forced service on the Barbados as a God-given opportunity to witness Christ to the crew. But his efforts to influence the hardened slavers seems to be doing little good. How is it possible to live as a Christian on the sin-ravaged seas? Can his light shine bright in Africa's dark interior?
Back in Grosvenor Square, Elizabeth Grey battles opposition from society and her self-seeking fiancé. Her work with John Newton to end the slave trade is being harshly attacked. She faces life branded as a jilter and radical if she stands up for what she believes in. Will she ever glean the strength to call sin by its rightful name?

There are two things I can always count on with Alicia Willis’ books. 1.) I won’t want to stop reading them; and 2.) The ending will satisfy me. However, I have to admit, sometimes the sheer size of her books makes me pause. After all, it is hard when you don’t want to put a book down but know that it will take you several days to get through it. That is the reason it took me so long to get around to this story.

As usual, Alicia swept me into the story easily. She is a masterful storyteller and does her research so that I know I can trust the historical details given. She also has a talent for not white-washing things, but never describing things in such a way that make me feel dirty. She makes no attempt to hide the fact that slavers were cruel and immorality was prevalent, but she never describes the perversions in any kind of detail.

I ended up liking Russell. It was a surprise to me, because I was sure I would hate him. I tend to find moral characters who have no faith unrealistic and frustrating. Russell was an exception, perhaps because Willis did such a good job of showing the flaws of his belief system.

Elizabeth was surprisingly understandable. I think that her situation was portrayed well in the historical context so as to keep her from being irritating. I wanted to rush in and be the friend she needed.

Jack was endearing and my favorite. His stand for faith in the dark times was beautiful. He is a great example to those young and old who find themselves standing for their faith in a dark time.

It always amazes me that even though her books are so thick, they go by so fast. I read most of it in one day, and I didn’t want to stop. Don’t let the size of the book scare you away; it will go by fast.

I highly recommend this book for those who like historical fiction, solid writing, and faith-building messages.