J. Grace Pennington is here to talk of Sci-Fi, Stargate, and much more

J. Grace: Hello!  Thank you for having me again!

HA: What inspired Firmament: In His Image?

J. Grace: I was greatly inspired by the first Stargate movie.  It got my wheels turning with story ideas before I even came up with the Firmament series, and after I wrote Radialloy, it seemed like a perfect fit to incorporate those ideas into Firmament.  I was also inspired by a question that was posed at the science-fiction talk at the 2009 Christian Filmmakers Academy--what does it mean to be made in the image of God?

HA: What is the most encouraging review you have received so far on this book?

J. Grace: It would have to be Sarah Holman’s review on her blog.  What made this review so special, even more so than the many other reports of people reading the book in twenty-four hours or so, is that Sarah said the book challenged and inspired her faith.  That means so much to me, since that is the number one reason I write.

HA: When you are not writing, what do you enjoy doing?

J. Grace: I love reading, of course, and I also enjoy playing and listening to music, knitting, watching movies and TV, hanging out with family and friends, taking walks, filmmaking, and putting together stylish outfits!

HA: What do you plan to read this summer? 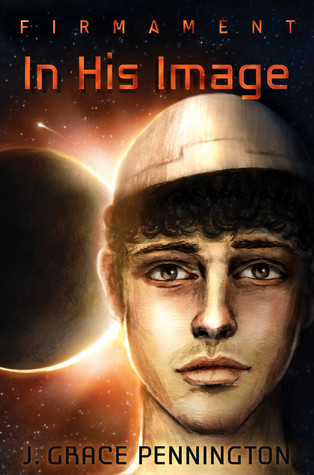 J. Grace: I pretty much plan on just reading as much as I possibly can this summer.  A few examples are Gods & Generals by Jeff Shaara, By What Standard? by R. J. Rushdoony, Redeeming Love by Francine Rivers, Bonhoeffer by Eric Metaxes, Kiss by Ted Dekker, the last four books of Katie Lynn Daniels’ Supervillain of the Day series, Sarah Holman’s Destiny trilogy, A Letter of Mary by Laurie R. King, E. M. Bounds on Prayer, and much more!

HA: What are some of your favorite books of all time?

J. Grace: Too many to list, but a few are Me, Myself, & Bob by Phil Vischer, With by Skye Jethani, Stepping Heavenward by Elisabeth Prentiss, Rose in Bloom by Louisa May Alcott, Runt the Brave and Runt the Hunted by Daniel Schwabauer, David Copperfield and A Tale of Two Cities by Charles Dickens, and Grace for the Good Girl by Emily Freeman.

HA: Can you give us a sneak peek into your work-in-progress?
J. Grace:
“I swear to you, Guilders, if I didn’t know better…”
“…you’d think he was a sensible, well-trained officer,” another voice spoke up.  We all looked up to see the Doctor standing next to the table holding a tray of food.
The Captain relaxed slightly and smiled, and Guilders scooted his chair over to make more room.
“What’s this all about?” the Doctor asked as he sat down.  “You’ve got all your feathers ruffled, Trent.”
“Guilders is being narrow-minded.”
The Doctor huffed as he picked up his spoon.  “And you’re probably being a little too broad-minded.  Perhaps a perfectly balanced individual like myself could be of help.”
The Captain scoffed.  “You’re more narrow-minded than he is.”
“Let me guess -- this is about Captain Holloway’s proposal.”
The Captain nodded and opened his mouth, but the Doctor held out his hand to signal a pause, bowed his head for a moment, then took a bite of his casserole.
“You have the same old-fashioned ideas he does,” the Captain smiled.  “If not more of them.”
“Your ideas aren’t exactly in mint condition themselves,” the Doctor retorted.  “You’re a Machiavellian, Trent.”
“Nothing wrong with that,” the Captain smiled.  “Though I’m not sure I see how it applies at the moment.”
“You want to disobey the rule you promised to stick to in order to do something you think is good.”
“I know all about what I’m doing, thank you,” the Captain insisted.  “But I still don’t see how it’s Machiavellian.”
I frowned at the Doctor.  “What’s a Machiavellian?”
He had his mouth full, so Guilders spoke instead, pushing his empty dishes away.  “You’re not familiar with Niccolo Machiavelli?  The Prince?”
“I don’t think so.  What was he the prince of?”
The Doctor swallowed.  “He wasn’t a prince.  He wrote a book called The Prince about getting and keeping power.”
“But when people say Machiavellian,” Guilders said, “they’re usually referring to the ‘Machiavellian principle.’  The idea that any action is appropriate when used to work towards a goal that is itself appropriate.”
“The end justifies the means,” the Doctor translated.
“That’s not what I’m doing,” the Captain insisted.
“If you’re not, no one ever has,” the Doctor scoffed.  Before the Captain could retort, he went on.  “But if it makes any difference, I know Captain Holloway is a liar.”

HA: What should readers expect when they read In His Image?

J. Grace: A mysterious, intriguing adventure full of twists and turns that challenges what they believe it means to be human.

In His Image is only one step in a much larger adventure.  I hope that readers will enjoy it will be able to look forward to finding out what happens next when Machiavellian is released this October!

Grab In His Image for $0.99 this week, read it, review it, and enter for a chance to win it.
a Rafflecopter giveaway