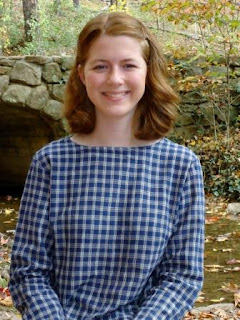 Morgan, welcome to Homeschool Authors! Tell us a little bit about yourself.
Thanks for having me! I am a seventeen-year-old homeschooled high school student, the oldest of three girls, and now, after a childhood of dreaming about it, finally an author! I love God, books, playing the piano and violin, babysitting, sewing, pottery, Ultimate Frisbee, Civil War era dancing, campaigning, American history well, I think I've covered the main things. I've been homeschooled ever since kindergarten and I've loved to read and write since I learned how. When I was eight, a family friend ran for State House, and, as a result, my family became extremely politically active. I have worked on multiple campaigns growing up, and am greatly looking forward to being able to vote next year. Honestly, I'm a lot more excited about getting to vote than learning to drive!

What is your favorite part of being homeschooled?
That's a tough one. There are a lot of things I like about being homeschooled, but probably one of the top things is that it has enabled our family to be close. Too often, you see that when children go to school, a wedge is driven between them and their families. They would rather hang out with their friends than their siblings, and they disrespect, and sometimes even hate, their parents. I, on the other hand, like spending time with my family. My sisters are my best friends. I like being with my parents, and I'm glad when they tell me what to do. While I have lots of friends and I enjoy hanging out with them, my family is more important. I feel sure that if my sisters and I were not homeschooled, things would not be this way.

How did being homeschooled affect your writing?
One way homeschooling affects my writing is the content. I'm pretty sure I would not be writing Christian books if I had gone to school. And there probably wouldn't be any of America's heritage in them either. Being homeschooled has also allowed me to stretch my mind and exposed me to classic literature, which has affected my writing style. Plus, most of my characters have ended up being homeschooled.

What caused you to start writing?
I've been writing so long it's hard to pick out what actually got me to start, but most likely it was my love of books. My parents read to me from the time I was a baby. When I was little, I would bring my mom stacks of books for her to read to me. My parents also read children's classics and historical fiction to me and my sisters at bedtime and during lunch. And I read loads of books on my own. I loved to pretend. I constantly imagined I was someone from a story, or someone I had made up. That developed into stories, though most of them were never finished. But I think what it boils down to is that God gave me a desire to tell stories, and it didn't really take anything special to bring it out. 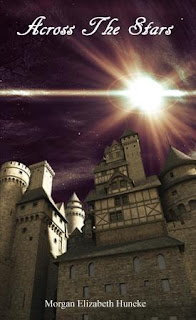 What inspired you to write Across the Stars?
I honestly don't know where the idea for the story itself came from, just that I started to make it up because I wanted to tell my sisters a story. I made up the beginning while I was riding my bike in our neighborhood, told it to my sisters, and it took off from there. The struggle for independence is inspired by American history, the dungeon by The Tale of Despereaux, and I'm sure The Chronicles of Narnia shaped my mind for it, but the story itself seemed to come out of nowhere. Most of my story ideas have very definite inspiration, but Across the Stars is not one of them.

What is it about?
Five children find a spaceship in their backyard, which transports them to a planet two galaxies away from ours. This planet has been ruled by a wicked tyrant by the name of King Jorrid for twenty years. The children, the Watsons, find that they are meant to lead these people to freedom. The Watsons use their knowledge of American history and the Declaration of Independence to work to free the planet. There are also three subplots woven into the Watson narrative exploring the events surrounding Jorrid's rise to the throne and his twenty year reign. I also want to say that though the story takes place on a foreign planet, the setting is a mixture of 1860s America and medieval times rather than anything futuristic.

Where can people purchase it?
On Amazon, both as a paperback and a Kindle book, and through the CreateSpace eStore. There are links to each of these on my website, www.morganhuneke.com.

Who do you think will enjoy it?
When I wrote Across the Stars I had children ages 8-14 in mind, but it has proved to appeal to a much wider audience. Actually, my friend told me quite recently that Across the Stars is for all ages. So if you like a good adventure story filled with Christian faith and American heritage, you will probably like Across the Stars.

If someone really enjoys Across the Stars, what other books would you recommend?
Probably The Chronicles of Narnia for one. C. S. Lewis is one of my favorite authors and no doubt has had quite an influence on my writing. A Wrinkle in Time by Madeleine L'Engle is another one I might recommend, being a space adventure with a fight of good versus evil, and also one of my longtime favorite books. Also, Johnny Tremain by Esther Forbes. I mention the American Revolution a lot in Across the Stars, and this is one of my favorite Revolutionary War stories.


Do you have any final thoughts?
I've always found it easier to understand and remember things if they were presented through a story. I think a lot of other people are that way as well. So when I write, I think of it as a ministry opportunity. My characters always turn to God in times of need. And they know the Christian heritage of America. I have tried to have a purpose greater than entertainment when I write, and hopefully that will help my books to endure.


Morgan is giving away a copy of her book! Enter to win!
a Rafflecopter giveaway