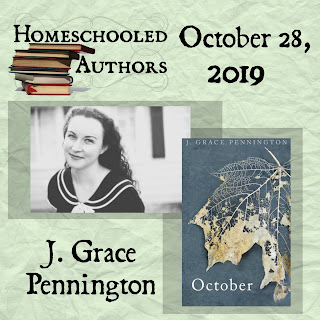 Grace, Welcome back to Homeschooled Authors! Tell us what has been keeping you busy of late?
Thank you for having me back! I have been mostly busy making small humans the past couple of years -- I have a fifteen-month-old daughter and another baby on the way! So that keeps me from being as productive in other ways as I used to be, but I am releasing another book this month -- the next book in my Firmament series! Writing while being a mom is its own adventure for sure!

You’re here today to talk about your book October (which is appropriate because it is the month of October). What inspired you to write this book?
I was ironing clothes one day, when I suddenly got an image in my mind of a girl with beautiful red hair spending time with her two younger friends, enjoying a beautiful summer day, but with something darker underneath that they didn’t know about. I was intrigued by it, and I knew where it had come from -- each of the major characters in the book is based on either myself or close friends of mine, and I wanted to explore some of my experiences with them -- of knowing someone but not knowing all the pain that’s underneath. At least, not at first.

What was the biggest challenge in writing this story?
The hardest part by far was just how vulnerable it was writing about such personal things. As I said, while the book is thoroughly fictional, almost everything in it is directly inspired by something real, someone I know, something that I’ve experienced, or something I’ve closely observed. That was difficult to share, but even just the writing was more emotionally draining than I expected.

What was the easiest?
In a sense, the easiest thing was the same as the hardest -- the fact that it’s all based on reality. While that was emotionally difficult, it made it easy for me to visualize the story, to understand the emotions and motivations, and to draw settings and details from what I knew best.

What do you think sets October apart from many books written for the same age group?
I hope it’s more honest than many books for young adults. Many that I’ve read either ignore darker realities of mental illness and the struggles of life, or they dramatize and glamorize them. In this book, I try very hard to do neither -- to face the hard things without trying to make them pretty or easy or simple.

What has your favorite response been to your book?
So many people have commented on its beauty, which means a lot to me. It is a dark book, and parts of it are very sad, but my goal was in the midst of it all to show the beauty of everyday life and the hope peering through the midst of the pain. People seem to have recognized that, which has been amazing.

Where can people buy the book?
On Amazon! Both the ebook and paperback are available there.

What is next for you as a writer?
As I mentioned earlier, I am currently getting my next book out! It is the sixth book in the Firmament series, my sci-fi series for young adults. It has been almost two years since October came out, so I am very excited to finally have another release!