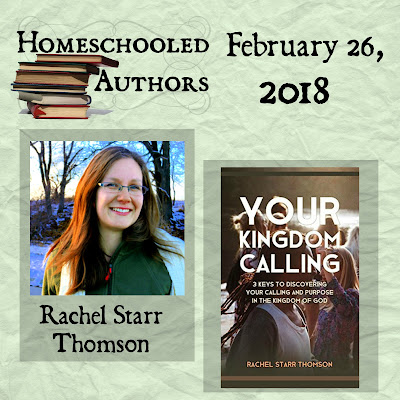 Rachel, what have you been up to since your last visit to Homeschooled Authors?
Wow, so much has happened since then! In my writing life, the most significant things have been starting a new blog (Revelatory Creative, located at rachelstarrthomson.com) in 2015, releasing several new fiction series, and finally making the leap to "full-time" writer in early 2017. It's been a crazy ride with lots of ups and downs, but I've loved it.

What inspired Your Kingdom Calling?
The biggest inspiration for Your Kingdom Calling came in a pretty roundabout way. When I went full-time as a writer in 2017, I shared my story with my readers and used the language of "finding my calling" several times. I was caught off guard by how many people responded strongly to that -- so many just had questions and comments about the whole idea of calling. At the same time, so many people struggle with understanding where their natural gifts, talents, and abilities "fit," or even how they have any value at all. I think we all know instinctively that we were born with a higher purpose, and we're on a journey to figure it out. I decided to teach a course on the subject because I wanted to help people uncover their own gifts and callings, and also get free of a lot of false guilt that comes with lumping all "calling" into certain categories of ministry or similar things. Calling is a really powerful and freeing biblical concept when we really understand it.

What is one of the stories that has come out of the Your Kingdom Calling video course that has touched your heart?
I've been really touched by people who've written to say, "I've been doing this thing for thirty years and I never realized it was service to God and my calling in life. All this time I felt guilty that I wasn't doing ministry, and yet God has been using me here." I love helping people lift off that condemnation and expand their vision for the kingdom of God. I've also heard from several people that the course inspired them to launch something concrete, be it a new blog or a whole new career!

Where can people get their hands on the book and/or video course?
The book: http://amzn.to/2GlREwS (full disclosure: this is an affiliate link)
The course: https://rachelstarrthomson.com/enroll-your-kingdom-calling/

The course is a great investment in understanding your place in the kingdom of God, but it's not inexpensive, so I'd highly recommend reading the book first to see if it's a good fit for you. The book is free on Amazon and elsewhere :).

You are also about to release a fiction book, Seeds. Would you share they synopsis for that?
SEEDS: A Christian Fantasy actually released on January 21-22, so it's out and ready for purchase! Here's the synopsis:

In the fantasy world of Kepos Gé, a young woman flees her past by joining a frontier settlement on the edge of the wilderness. But she can’t escape the threats abroad in this new world — or the wild things growing in her own heart.

Something is deeply wrong in Jerusalem Valley, where the persecuted religious faction called Tremblers are trying to create a new society. As Linette Cole struggles toward acceptance and newfound faith, friends turn to enemies and enemies become friends.

Soon Linette will face the greatest challenge of her life:

Because words have been spoken.

SEEDS is page-turning Christian fantasy by acclaimed author Rachel Starr Thomson — a novel about a wild frontier, monsters in the shadows, and a world trying to hold onto a fragile peace even as dark forces conspire against them.

Rachel’s signature spiritual parallels make SEEDS a journey that will not only keep you reading, it will also strengthen your faith.

What is next for you as a writer?
I always have several things on the go, but the sequel to SEEDS is high priority. I'll also be cowriting a nonfiction book in February along with my coauthors for FEARLESS: FREE IN CHRIST IN AN AGE OF ANXIETY. By the way, this last is another book you can get free from Amazon, for the time being--our goal is to give away 10,000 free copies, and we're halfway there! You can grab your copy here: http://amzn.to/2Gny2c7 (affiliate link as well).

Any final thoughts?
Being a writer is a huge blessing to me, and I'm grateful for everyone who has helped make it happen. Thanks to you and the HA readership for being a part of that journey as well!