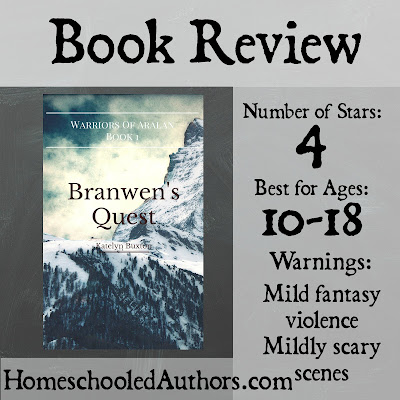 Buy it Here
Description: When the royal herald came announcing a mandatory Tournament of Warriors, Branwen was the last one to get excited. Sure, she was a good enough archer, but why should she be forced to go to the tournament just because the king said so? She had nothing to prove by going! Yet when she got there her competitive spirit took over and she succeeded well enough to be singled out by the king to take a difficult journey with three others who were as different as night and day from each other. Why? To recover the king and queen's missing crowns. Will they ever be able to overcome their differences and get along to complete their mission, or will they fall prey to an unexpected danger posed from within?

A girl who is an archer yet is trapped by the hurt in her past. Four strangers banding together on a quest. Sounded like a pretty interesting plot to me! While fantasy is not my favorite genre, I enjoyed this story. It felt a little like the fantasy level one found in The Princess Bride, yet with a little more serious bent.

Branwen was one of those characters that you feel sorry for sometimes and want to shake at others. She feels she is responsible for her sister’s death and had never recovered from that fact. Her personality seemed to match someone who carried that kind of guilt and trauma.

The other characters within the story were interesting and had their own personality. Buxton did an amazing job at creating an interesting and diverse cast of characters. I was surprised at some of the turns that the characters took, yet they made sense. Buxton has a grasp on the inner working of people that few authors seem to possess. This fact alone will take her far in her writing.

The setting was fun. There were elements like giant eels, a huge booby-trapped castle, and a curse that had to be stopped, without magic. In fact the only caution I would have is for some violence. Although not too detailed, younger children who are not used to fantasy might not like it. Yet, for those who like mild fantasy, they will find this an interesting world. I look forward to my next visit (I have the second book on my Kindle).

There wasn’t any romance in this book, but I expect that to change later in the series. There were a couple of moments when I thought that a faith element might be about to introduced, but in the end nothing had come of that.

I recommend this for younger readers who love fantasy, adventure, and realistic characters.

I received this book for review. I was not required to write a positive review. All the thoughts in this review are my own.