Book Review: From the Dark to the Dawn: A Tale of Ancient Rome 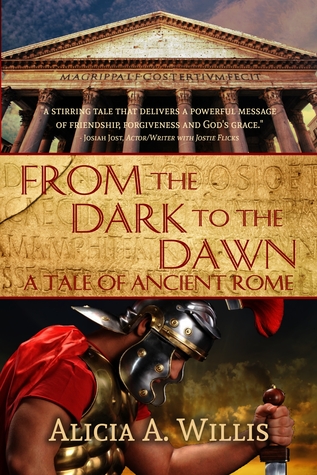 Age Appropriate For: 15 and up for violence
Best for Ages: 15 and up
Buy it here
Sarah Holman's Endorsement: From Darkness to the Dawn encouraged me in my own walk with God and touched my heart deeply. It is not easy to read, but hard to put down. Emotionally difficult, yet inspiring. It is a book the reaches down into the depths of pain and climbs to the heights of joy. It is a book that pulls the reader closer to the heart of God.

Description: Decadent Rome, 61 Anno Domini. The masters of the universe have crushed the Iceni rebellion with an iron hand, slaughtering and enslaving her people.For Philip, his existence as a captive means living to hatred. He despises his rich, young master, resenting his life of servitude and the wrestling feats Marcus forces him to perform. Bitterness engulfs his soul until he only lives for the day when he will crush the might of Rome.Then Christianity enters the picture. Taught by a Jewish breadmaker to know the man called Christus, Philip begins the struggle to forgive and honor his master. But forgiveness is not easy towards one who lives for himself.Marcus Virginius knows nothing but power and pleasure. Destined to a successful career serving Nero in the Praetorian Guard, he wants no part of Christianity. And he is determined to crush Philip’s newfound faith – no matter what it takes.Join Philip and Marcus in their journey of redemption, faith, and forgiveness. Is love enough to conquer hate? And will the light of the gospel ever surmount the darkness of Rome?

I regret it has taken me so long to write this review. However, I didn’t want to just throw this one together. I wanted to make sure my review was worthy of this incredibly awesome book that I was privileged not only to review, but also endorse.

This is not a typical historical fiction. It does not contain frothy romance, or flawless heroes. This book is not a light afternoon read, nor is it easily discarded. It is hard, gritty, and inspiring tale of faith, true love, and redemption.

This tale starts in Britain as the Roman’s finish subduing the Britons under Queen Boudica. Phillip and his father are taken as prisoners and sold to wealthy a Roman. Philip is very bitter and rebellious toward Marcus and his master. He begins to look for ways to escape or even kill Marcus. That all changes when Phillip encounters the new religion of Christianity. Phillip starts to change and his master notices.

I must admit that there were times in this story when I had to take a break. The Romans were a violent people and took pleasure in many pass times that would disgust even many secular American’s of today. However, unlike another book I read not too long ago, this story did not go into so much detail that I wouldn’t want to read it. However, it wouldn’t be nearly as powerful without the grittiness and the harshness.
Philip was easy to like and easy to feel a connection to. You see all he suffers in the beginning and the threats made against him later on because of his faith and yet he stands strong. He is not perfect, even as his faith grows, he has moments of weakness. He was a very real character.

Marcus was equally real, but (as I am sure the author intended) I really disliked him at first. It took me a long time not to hate him, but as I saw change in him, he grew on me.

I have only to complaints about this book. One, I didn’t realize that there was a glossy of terms in the back. This would have been helpful as there was a lot of terms and Latin, especially in the beginning that I had no clue what they meant. Two, at one point in the book everyone assumes that one of that characters had bad motives for helping a girl. I would have liked at least one character to acknowledged that his faith had changed him and not have assumed the worst.

The romance was good, and wholesome. It didn’t dominate the story, and that was just fine with me. It added much to the story without taking over the story.

Faith is not an element in this story; it is the thrust of this tale. God’s message of redemption, Grace and eternal life is always in the forefront.  Some may find this overbearing, but I found it inspiring. There are few authors that have the courage make their entire story about faith, not just had Christianity as an element to the story. I applaud Miss Willis for her courage and I am sure God will bless her and many others for her efforts.

I highly recommend this for older readers who want to be inspired in their faith and read a good story while doing so.

Was this review helpful? Vote it up on Amazon!

I received this book from Author in exchange for my honest review. I was under no obligation to write a positive review. The opinions in this review are entirely my own.
Posted by Sarah Holman at 10:15 AM