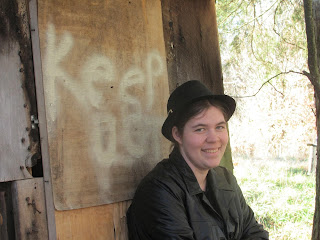 Now, tell us a little more about yourself.
I've been making up stories since I was very small, although I didn't know it at the time. My greatest passion is to imagine what-could-have-beens or what-ifs. I am both a geek and a nerd; I love Doctor Who and all things scifi, and I'm also into hard sciences such as cosmology. In addition to being a fantasy and science fiction writer I am a singer/songwriter—I play harp, piano, and guitar. I work a day job baking cupcakes, and I run the family dairy.

Who is your favorite superhero of all time?
I'm not all the familiar with my choices, but I'd have to go with either Spider-Man or Iron Man. Tony Stark is a hilarious character, and I love his movies, but Peter Parker is so vulnerable your heart goes straight out to him.

How did being homeschooled influence your writing?
I got credit in highschool for writing a novel. Seriously, though, growing up I read a lot. Well, a lot would be an understatement. One unifying factor among all homeschoolers I've met seems to be our insatiable craving for the written word. I can't say that, had I not been homeschooled, I wouldn't be a writer today, but being homeschooled definitely made me a better one, and it made it happen sooner. I had the freedom to write whenever and wherever I wanted, my creativity wasn't stifled by rules and textbooks and teachers. And I really did get highschool credit for my second novel “Prince of Yen.”

What inspired you to write  Supervillain of the Day?
Oh, so many, many things. It started with a what-if, and it ended with Spiderman. I was watching the second movie, I believe, where Spidy battles the sandman, and later he's sitting on a roof somewhere, emptying sand out of his boots, and wondering “Where do these guys come from?” Well, where did they come from? 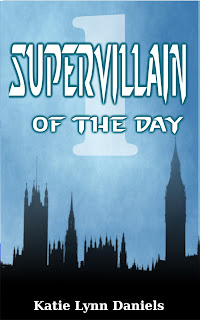 Think about it. Every superhero movie features a new villain. So if there were no superheroes, the villains would just continue to multiply, undefeated! And then what would become of the world?
And then in the middle of all that was the technical idea of writing a series like a TV episode, which came about because I don't do well with writing real novels of reasonable word length. All the supervillain novellas are 20K and can be read in one sitting; the literary version of a 45 minute TV episode.

What is Supervillain of the Day about?
In a world without superheroes, who will fight against the forces of evil?
The supervillain outbreak has begun. Reports are trickling in from all over the world of havoc and mayhem being wreaked by evil masterminds and villains. In the midst of this world-wide phenomena, however, London is strangely calm and peaceful. Not a single supervillain has made an appearance. For most Londoners this is very good news, but for the editor of a tabloid paper specializing in the strange and unusual it's very bad news indeed.
Reporter Jeffry Floyd is assigned the task of finding a supervillain “or else.” He appeals to Scotland Yard for help, but his incessant poking at shadows gets him banned from the case, until one sergeant realizes that both Floyd and his “investigation” are more than they seem...

Who will enjoy it?
Hopefully everyone! My goal was to appeal to both young and old audiences; anyone who enjoys superhero fiction, or goes to see the Marvel films. The books are not aimed specifically at a young adult audience, but I made sure they were acceptable for younger readers. The characters are adults, however, which is always a helpful factor in obtaining an adult reader base.

Where can people get it?
Amazon! The tried and true. It is available in both print and kindle format here:

Do you have any helpful hints for beginning writers?
Keep writing, no matter how discouraged you get. Nothing you do is unimportant. Even your worst attempts at writing is simply a step to becoming the writer you wish to be. If you don't take those first steps you'll never reach your destination. If you don't write terrible stories you want to burn a year later then you'll never write wonderful stories you want to share with the world. So just keep plodding on and you'll get there eventually.

Do you have any final thoughts?
The supervillain outbreak has begun. What are you going to do about it?
Posted by Sarah Holman at 3:00 AM