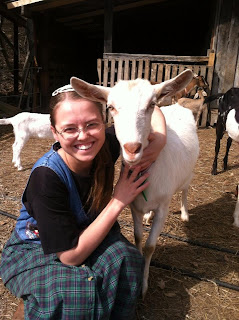 April, Welcome to Homeschool Authors! Please, introduce us to yourself.
Well, I’m a young lady in my early twenties, living with my family on our small farm in rural South Carolina. I was raised in a Christian home, but my personal relationship with Jesus did not fully blossom until December of 2010. He is my most precious Treasure, my reason for living, and my Hope through every day. I am always seeking to deepen my relationship with my Jesus, and I pray that everything I do and say will reflect Him as my Life, and not me.
I love living on the farm He has given us, raising registered dairy goats (as well as other animals), and I enjoy being able to work with my family in our construction business, (though, granted I don’t like the work!) renovating low-income homes for the city government.
I love history and all things old-fashioned. I’m especially interested in domestic history.
I also love doing other things – playing piano and violin, listening to bluegrass music, sewing, and cooking to name a few.

What did you enjoy most about being homeschooled?
Growing up I was not consciously aware of being homeschooled. I was homeschooled from first grade on, and it was pretty well just a way-of-life, if that makes sense. We didn't have a lot of friends, so it wasn’t like we were able to visually and physically see the difference. But there were moments, especially after our occasional visits with relatives, where my sister and I would compare our homeschooling to public schooling, and I think the thing that almost always stood out to us was the lack of influence. (Of course, we didn't say it this way then!) We appreciated being able to be ourselves and not being forced into conforming to a code of life like children in public school are often obliged to do. We didn't have to feel like we weren't fitting in simply because we chose not to give ourselves to doing/saying things that were repulsive.

If you could go anywhere in the world, where would you go and why?
There are many places I would love to visit, mainly for historical purposes, but if I had to narrow it down to one the place I know it would have to be the great southern-hemisphere continent of Australia! I would choose to go there first above any other place because my sister and I have a very precious sister living there whom we would give anything to spend time with.

What was your favorite book when you were little?
This is a difficult one! I grew up reading many varied children’s books, but when I was eleven I think I could have been said to have discovered a library for the first time. We had always gone to libraries, but after this discovery it became a weekly (if not twice weekly) ritual. I never read a great deal of fiction, though. When I really started devouring books, it was amidst the library aisles of adult non-fiction. I discovered my love of history at that time (though it was there from as far back as I can remember, it had finally become something tangible) and I poured over books chronicling American history – colonial times, the Revolutionary War and the War of 1812, Aaron Burr and his New Orleans empire, the writings of Jefferson and Tarleton – and moved on to European history with the House of Hanover in England, Napoleon and his sweep of power across early 19th century Europe, Regency England, and the never-ending story of the formation of the German States. I never had a favorite book, in particular. Anything that was old suited me; I could not bide contemporary historians. One writer I particularly admired – and still do – is Sir Winston Churchill.

What caused you to start writing?
My sister. The Lord Jesus used her to start us writing, even if she never grew to love it so much as I did. Before we moved our residence to the adult section of the library, we were reading everything we could of historical biographies on the juvenile shelves. It was a series of fictionalized tales of the childhood of some of history’s most renowned figures. When we exhausted them (in a matter of weeks, I believe), she started penning her own about people in her imagination, and of course I followed.

What inspired Enslaved to Freedom?
Another difficult one!
I can’t really say anything inspired my present story. Not in the way of seeing a picture, hearing a song, or reading a book might give one an idea that kindles a flame and ignites a novel.
I was searching for something, in August of 2011, to write for my sister’s upcoming birthday. I was sitting alone outside, it was a bright, South Carolina, summer day; blue sky, unhindered sun, hot, stuffy air and I had some fresh paper on a clipboard staring up at me. With much, much prayer I just started penning one of my favorite scene-types; a man on a ship, overlooking the sea. Then the words to forget the horrors of my past came out and the Lord Jesus began opening Sullivan (the main character) to me. Little by little his life’s story, and present situation, began to unfold and the Lord has brought about Enslaved to Freedom.

What is it about? 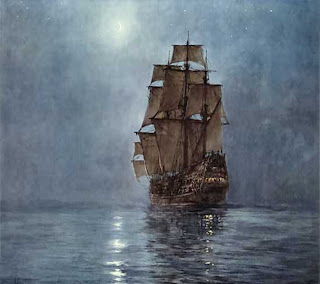 Enslaved to Freedom is about a man who found himself, as a youth, caught up into the profession of piracy. Entering this world was a complete accident, but one driven by despair and tragedy. Once in it young Sullivan could not escape it and after some years, eventually found himself embracing it with everything he had, in preference to his old life which was racked with pain, poverty, and sorrow. He did well in his new element, and with much training and application, he slowly rose to command his own vessel and crew of some hundred-odd men. Running from a botched passed, he immersed himself in his newly-found world and created a man of himself that he found could live above the tragic missteps of his youth and press on, despite everything else. But he had one great enemy; his own guilt. Almost two decades following his stumbling upon this new, unbounded world he finds himself faced with something he never thought he would face again, something he thought he had crushed forever; his old self. The man he once was is resurrected by the presence of single prisoner, a single woman. A woman he feels he cannot live without, a woman who, though indirectly, drives him to a bitter realization of the monster he has created of himself, and of the wickedness of the life and world he has buried himself and his conscience in for so long. Rising from the ruins of his past and of his present, one thing stands harshly ominous in his future. Can the Love that worked to bring him and this patient woman together, that worked to reveal his faults to him and bring him to the Light of Salvation, also save him from the penalty of his life of crime? Will he escape London’s hangman and live to mend two decades of waste?

Who will like it?
The book is aimed at mature audiences, men and women. Young people, in their mid-ish/late teens would also enjoy it.

Where can people get it?
Currently, it is in the finishing stages of writing. I’m trusting that the Lord will bless and allow it to be finished somewhere around the middle of this year. Depending on the way He takes me in publishing, I’m expecting it to be available around July or August 2013, primarily online.

Do you plan to write more books?
Certainly! Enslaved to Freedom has several sequels in the planning (all under the series title Unlikely Lives), and the Lord Jesus has blessed me with many ideas for other stories. Some will be pirate-themed like Enslaved to Freedom, but I have many thoughts for western settings, as well as the US Colonial and the Victorian Eras, slave stories, and others. So...there’s a variety!

What is the biggest thing you have learned about writing while working on Enslaved to Freedom?
To trust the Lord! I used to write and depend so much on myself, my ability, my reasoning to figure out characters, plots, settings, to make scenes just right. But writing Enslaved to Freedom has been a huge lesson – and test – of faith. From the first page to where I am now, I have had to pray, seek the Lord Jesus, and trust Him for the outcome. My goal in writing has always been to glorify the Lord, and to help others to see Him and trust in Him. When I first began Enslaved to Freedom, and as it has grown, it has seemed in complete rebellion to that goal. But with much prayer, the Lord Jesus has brought me on through the story; trusting in Him the characters have developed – so much more deeply than if I had just worked them out on my own intellect – and I am beginning to see the bright light at the end of the tunnel; the light that says, “This is what it’s all about; here’s the purpose. What you thought was not working out has become something beautiful.” So, certainly the biggest thing I’ve learned about writing is to trust the Lord! To simply be a pencil in His Hands.

Do you have any final thoughts?
Well...as a final thought, I’ll just say that I think one of the most important things in writing is purpose. I think it’s important that every writer take a moment, every so often, to examine his/her purpose for writing. Write it out, journal it – and do it honestly. Writing is like anything else, there has to be a meaning to it or one will find herself spending hours toiling and laboring only to look back and think to herself, “What a waste!”
There has to be a purpose.

Thank you for having me here on Homeschool Authors, Sarah, and thank all your readers for taking the time to read this interview. It’s been wonderful answering all these thought-provoking questions, and I pray I can have a chance to return the favor sometime!

Find out more about April on her blog
Posted by Sarah Holman at 3:00 AM