Out of Darkness Rising 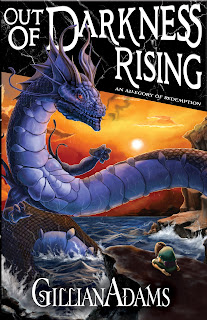 Darkness reigns unchallenged.
For the villagers on the accursed Island, life has only one meaning - death.  Bound to the Island by the curse, the villagers suffer beneath the iron claw of the serpent, daily breathing the poison of his breath and dying to appease his insatiable appetite.
When Marya’s parents are slain by the serpent for their belief in a legendary king, she becomes an Outcast.  Struggling to survive and avoid the vengeance of the Tribunal, Marya is torn between legend and the harsh reality of the Island.  Yet when a forgotten promise springs to life, she cannot help wondering if the old stories might in fact be true.  And if they are, will the promise prove stronger than the curse?
Out of Darkness Rising is being published by Flaming Pen Press and will be released summer 2012. It is an allegorical fantasy novella intended for a young adult audience.
Posted by Sarah Holman at 3:00 AM