Daniel Helland on More Than Conquerors 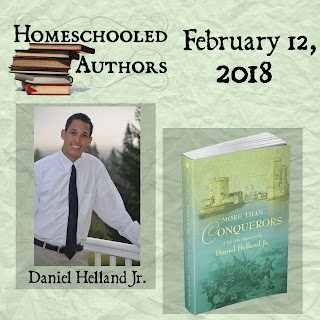 Daniel, welcome to Homeschool Authors! Tell us a little bit about yourself.
I am a homeschool graduate, the oldest of ten, and a twin. I love working on the farm, speech and debate, reading, history, video making, gospel music (southern and bluegrass) and apparently writing books of adventure and intrigue. I am what some might refer to as an unsophisticated simpleton: one who believes strongly that the Bible is God’s Word to us and is true in everything it says.

Everyone’s homeshooling experience is different. What do you think made yours unique?
There was probably no one thing that made it unique. Really, homeschooling is a unique thing on its own in today’s culture. People tend to be surprised when they meet a family as large as mine and hear that we were all educated at home.

How did being homeschooled prepare you to write?
It gave me a lot more time to write, and pursue certain subjects in greater depth, like the Reformation and the Huguenots.

What caused you to start writing?
Since I was a young kid I have always considered myself a writer and a storyteller. How this originated, I don’t know – but I was always writing stories, and fancied I was going to be the next Tolkien or Lewis. I used to be proud when I pumped out a 20 page story – my book More Than Conquerors is over 400 pages.

What inspired More than Conquerors?
First and foremost: the underlying history of the Huguenots, who were the Protestants in France during the Reformation. The King waged several wars against them to get rid of them because of their perceived threat to his ‘divine rights.’

Secondly, a growing desire to help people in our day, especially young people, see the epic and heroic nature of the Reformation – one of the most important moments in history – and realize that there are things worth fighting for, and battles worth fighting on principle, even when you are the losing side, the minority, and there is no victory in sight.

Would you give us a synopsis?
By the time the book ends, the reader will have traversed all over 16th century France, walked the halls of cathedrals and palaces, beheld giant armies on the field of battle, seen a beautiful coastal city under siege by a massive royal army, and trekked in the untamed jungles and forests of the New World. Nonetheless, the story starts small with three main characters living in Geneva, Switzerland. Theodore, an ordinary young man who wants to fight for the French Huguenots, Charles, an old veteran soldier who is still up for another adventure, and Johanne, a self-proclaimed man of reason who doesn’t want his nephew, Theodore, to waste his life in a war-torn country. The threesome embarks on an adventure far wider in scope than anything they had ever imagined.

Who will enjoy More than Conquerors?
I think regardless of your age, your interests, or the genres you usually read, the characters and times in More Than Conquerors will captivate you as they did for me. Some older people read the book and helped me edit it and they enjoyed it, and I have also received good feedback from audiences younger than myself. Even Arthur Conan Doyle, the author of Sherlock Holmes, said the “best of all were the Huguenots.” I’m inclined to agree with him.
Buy it here.

Do you plan to write more books?
I do – More Than Conquerors took two or three years of brainstorming, writing and revision, and the next book might as well, so be patient!

Do you have any final thoughts?
I’ll just leave with some advice for other writers and upcoming authors who, like me, have been writing for a very long time but perhaps have not yet published something – actually a quote on recycling from C.S. Lewis.

“When you give up a bit of work don’t (unless it is hopelessly bad) throw it away. Put it in a drawer. It may come in useful later. Much of my best work, or what I think my best, is the re-writing of things begun and abandoned years earlier.”
Posted by Sarah Holman at 1:00 AM