He Surprised Me Part 2 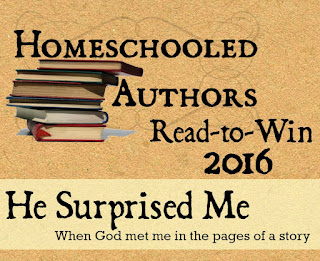 Homeschooled Authors asked:
When God meet you unexpectedly in the pages of a book?
(We excluded the Bible)

Morgan Huneke ~ Caught by Margaret Peterson Haddix. I’d picked up on hints that she was probably a Christian in some of the Shadow Children books and earlier Missing books, but I wasn’t sure. And I was not expecting the big reveal at the end of Caught. Without giving too many spoilers, a very wibbly-wobbly, timey-wimey discovery is made about a certain character, and you find that all these “mistakes” they’ve made, all this trouble they’ve caused with time were actually meant to happen, and one of the characters indicates that God controls it all, that all these things happened because God said they were supposed to happen. It was a “wow” moment for me. All the mistakes we make, all the things we think we messed up, God is using for His glory. He’ll work it all out. And I thought I was just reading a fun time travel adventure!

Sarah Holman ~ I was very angry about a lot of things that were going on in my life and I felt as if every time I opened my Bible, all I found was condemnation. I decided to read the most secular book I could find in the house. If you could have seen our bookshelves, you would have see how laughable this was. I decided to read the Chronicals of Narnia. Allegories were often lost on me so this seemed a safe choice. I was reading the Horse and His Boy and I came to the point where Shasta is on the mountaintop and I started crying. It was just want I needed to hear from God when I was trying to run from it.

Kate Willis ~ I was reading a hilarious fantasy series. Imagine taking The Princess Bride, The Lord of the Rings, and a bit of Hank the Cowdog and stirring it all together. That’s how you get The Wingfeather Saga by Andrew Peterson. I found it interesting, epic, and very amusing. Who knew that in the last few chapters of the last book God would throw at me one of the most heartbreakingly beautiful things I had ever read? The main character was going around and around in his perfectionist, performance-based mind when he met with God and was told, “Peace, be still.” He was loved and that was all. I will always remember the moment when I sat with Janner Wingfeather in his perfectionism, jealousy, and despair and discovered the grace of God all over again.

Nicole Sager ~I experienced this when I read Colleen Coble's Safe in His Arms. Often I'll relate to one or more characters in a book, but can't usually connect with their struggles or apply the lessons they're learning to my own life. Reading Safe in His Arms I found myself relating to the heroine and her struggle, and often felt as if I was reading something written directly to me. The Inspirational side of the story truly touched my heart, and by time I read the last words in the story I felt as if I'd had a sweet reminder of God's love for me personally.

Rebekah Morris ~ Having read biographies of many missionaries, preachers, evangelists, etc, I wasn’t expecting to be as impacted by this biography of H. Grattan Guinness, the brother of Mrs. Howard Taylor, as I was. Wow! What a life. The book, titled Guinness of Honan by Mrs. Howard Taylor tells the story of a missionary to China. I wrote down several quotes from the book and am still challenged by them today.
Posted by Sarah Holman at 3:00 AM