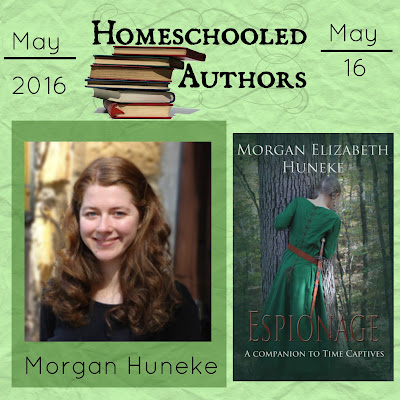 Morgan, what have you been up to since the last time you were here?
Goodness, a lot of things have happened in the two and a half years since my last interview. I published four more books (one of which comes out today), helped win a congressional campaign, graduated, moved, joined a college orchestra as a community member, built a basement, got a job at my local library…it’s been insane. I’m currently working on a YA outer space dystopian novel (well, that’s the official genre tag I put on it, my stories don’t like to be typical of their genre), and getting ready to prepare book 3 of Time Captives for publication.

What inspired the Time Captives series?
That’s difficult to say. Time Captives happens to be another one of those not-quite-sure-where-the-initial-idea-came-from books. The Experiment, Espionage, and my YA dystopian were all sparked by dreams. Time Captives…it probably largely came from wanting to write a fantasy story. There are definite Narnian influences, ideas from Tuck Everlasting, and influence from Gone-Away Lake. I’ve also pulled inspiration from Ilyon Chronicles, Dragons of Starlight, and Doctor Who. It’s been quite interesting.

What do all the Time Captives books have in common?
Time Captives is essentially one story in three volumes. The overall storyline is about freeing the people of Calhortz from the strytes who invaded and enslaved them. Each book has its own smaller goal within the story, but there’s always that overreaching end in sight. While the cast of characters grows with each book, it’s always essentially about the Time Captives, fourteen children from our world who disappeared, one every twenty years, and their quest to save Calhortz.

What makes Espionage different from the rest of the books in the series?
First off, Espionage is a companion, so while it’s connected to Time Captives and helps to set the stage for the third book, it’s independent and not technically a part of the trilogy. It has a shorter timeline, smaller cast, and (even though the stakes are very high) is much more personal. It’s set in Briznom, the neighboring country to Calhortz, which is only seen in short glimpses throughout the Time Captives trilogy. Espionage is also rather more political. And it’s written in first person. Before Espionage, I hadn’t completed a first person narrative since I was nine, so that was interesting and a fun challenge.

If you could pick one character from Espionage to meet, which one would you choose?
Hmm. That’s difficult. I would be torn between Vannie and Kyle, the two main characters. I love them both so much and they’re so different. I know Vannie inside and out already, though, so I’d prrrroooobably choose Kyle.

What have been some of your favorite Homeschooled Authored books that you have read in the last year?
Samara’s Peril by Jaye L. Knight. Water Princess, Fire Prince by Kendra E. Ardnek. Implant by J. Grace Pennington. They’re all SOOOOO good, and WPFP is how I got to know my best online friends.

Where can people find Espionage and the other Time Captives books?
They’re all available on Amazon, both as paperbacks and kindle books. You can also purchase from CreateSpace or get signed copies directly from me.

Any final thoughts?
I’m having a blog tour for Espionage right now. Find fun interviews, reviews, and behind the scenes information here.

Writing is a gift from God. And sometimes He’ll weave messages into your writing that you don’t even notice until you get to the end. It’s pretty amazing to see.

Thanks for having me!

(You can find a giveaway for the book here.)
Posted by Sarah Holman at 3:00 AM