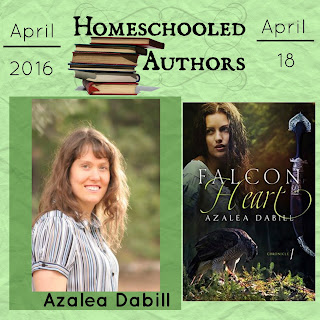 Azalea, welcome to Homeschool Authors! Tell us a little bit about yourself.
Well, I grew up with a patchy school history: I learned some math from Dad, who's a machinist (this doesn't mean I'm good at math, I'm not), doing some A Beka curriculum or something similar, and a little experience with traditional junior high and high school. I hated those quarters in school--not the teachers--the environment. Then I got my GED. The oldest of five siblings, I have always loved books, and even some of my English classes and workbooks. We had no TV where we grew up in the California hills, and I read to my brothers and sisters a lot. Home-schooling soaked me in various experiences, from hunting squirrels with a bow with my brother, to hiking the wilds of far galaxies and worlds in my books, to learning how to learn and think constructively about problems, school or otherwise, without being spoon-fed.

What caused you to start writing?
One day I was frustrated. I'd put down an excellently written book because of the immorality in it. Looking out the window, I thought, I'd like to see more good, clean adventure for other people like me to read. Not sentimental Amish romance. I was in my teens at the time. My first story, about a boy and girl who are twins in a besieged medieval castle (I think it was besieged--can't remember now) reached about three chapters and died. Then I had an idea for another book. But that's the next question.

What inspired Falcon Heart?
When I was young, I confess I admired the show Xena: Warrior Princess. I didn't even see the wrong things in it until later. What I saw was a woman who stood up for the helpless, who defeated evil, and had a best friend she would die for, and who would die for her. Later I quit watching it when I realized what was really going on, the bad slurs on God and His moral law, the wrong dress, not to mention sub-par acting. But the original impression, the dreams of heroism and adventure it stirred in me, stayed. And I knew, or was convicted, that I had given up on my first story too soon. So I told God that I would keep writing on this story idea until I finished it, or He made it clear He wanted me to do something else. A very helpful Christian author, Jeanette Windle, told me at the Colorado Christian Writers Conference that the bare bones of Falcon Heart was a book in itself, too long for a single book. Thus Falcon Heart was born, with the sequel, Falcon Flight, coming soon in May.

Would you give us a synopsis? 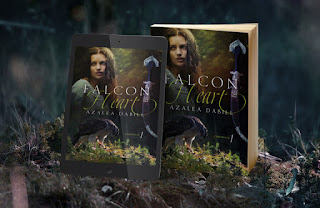 Sure. From the Amazon description:
A band of slavers murder stronghold daughter Kyrin Cieri's mother. Forced to sail for Araby with an exiled warrior from the East and a peasant girl closer than blood, she learns Subak from her husband-in-name to protect her from the raiders of the sands and the secrets of the caliph's court.

A strange dagger pursues her through tiger-haunted dreams.

Will she live until she faces the sword that killed her mother and find justice for her blood? For she must return to her father's side and take up the keys of her stronghold.

To keep her friends from a fate worse than death, Kyrin Cieri, keeper of the keys, takes up justice against hate and a dagger against her master's sword. If she can pay the price the falcon dagger demands . . . and forfeit ever returning to her people.

Discover the legend of Kyrin Cieri, who adventures with her mother's mysterious falcon dagger from Britain to Arabia and back.

Who will enjoy Falcon Heart?
Also from Amazon description:
Falcon Heart, the first book in an epic young adult fantasy series, is a medieval adventure that will please fans of Sherwood Smith's Crown Duel and Stephen Lawhead's King Raven trilogy.

Do you plan to write more books?
Yes, I've got three companion Entries to Falcon Heart written, and I'm working on a fourth, with about twelve total planned. Two stories, Path of the Warrior and Cieri's Daughter, are free for anyone who signs up for my blog-letter.
Both Falcon Heart and Falcon Flight will be free ebooks May 13th - 15th, 2016 in honor of the new release.
If the Lord wills, I want to finish the Entries and Kyrin's world by the end of 2016 and begin my next book, a straight-up sword and sorcery fantasy, the sorcery part belonging to an evil queen, involving her daughter, who runs away and, with a gaggle of friends and enemies, must protect a sword and win a kingdom and a prince's heart. All this despite her fears--not to mention war, intrigue, and assassins. And in the process she finds new life and courage in the words of an old man, a wise counselor who serves the Creator of all.

Where can people connect with you online?
Contact me anytime at any of the places below. All questions and opinions welcome!
Website: www.azaleadabill.com
Email: azaleadabill@gmail.com
Twitter: http://twitter.com/AzaleaDabill
Pinterest: http://www.pinterest.com/azaleadabill
GoodReads:  https://www.goodreads.com/user/show/10067218-azalea-dabill
Wattpad: https://www.wattpad.com/user/azaleadabill
FB: https://www.facebook.com/azalea.dabill

Do you have any final thoughts?
Hmm. We're all writers, here. We all probably have more book ideas than we'll ever keep up with. The thing is, keep honing that skill and that gift our Creator is growing in you. Be faithful to Him, giving Him room and a free hand to work out the details of our writing career (or lack of it), and He will. He will put you in an effective place, as He wishes. It may not look like our vision of success, but if it's His, that's what matters. His "well done," is what I'm searching for at the end of the world. Aren't you?
Posted by Sarah Holman at 3:00 AM