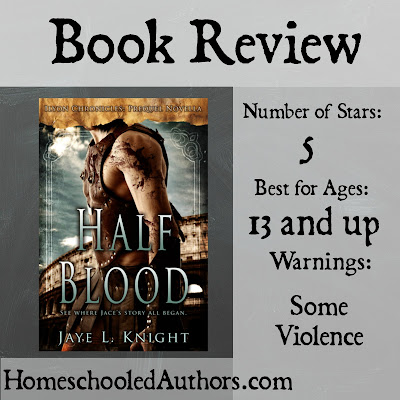 Buy it Here
Description: For all his years as a slave, Jace has known nothing but the hatred people hold for his mixed blood—one half human, the other half the blood of a race considered monsters. Always, he is the outsider and quickly learns it is better to keep to himself. But, when his volatile ryrik blood leads him to do the unthinkable, he is thrown into a world of violence and bloodshed. Forced to become a gladiator, Jace finds more and more of his heart dying as his master works to break down his will and turn him into the monster everyone believes he is. When a stranger interferes with his master’s harsh punishment, Jace’s world is upended again. But with it comes the possibility of hope that has long since died. Could the man possibly hold the key to escaping the hopeless darkness that is Jace’s life? Is there such a thing as life beyond the cruelty of slavery?

A story just about Jace? One where I finally get to hear about his background? Yes please! *ahem* Yes, I was very eager to read this book when I was offered an advanced reader copy.

The first thing, have a box of tissues with you. This story was heart-wrenching. I knew it wasn’t going to be lighthearted, but I was not prepared for the emotional punch this story packed. Knight didn’t spare the readers of the hurt that made Jace into the person he was.

Knight’s writing gets stronger with each story and books she writes. The words painted a harsh world in which Jace lived and brought it to life. I could see everything in my mind so perfectly. Talent must be her middle name.

The message of the power of words and the power of acts of kindness were a part of the story, though I am not sure if the author even concisely thought about it. However, both were very powerful.
This powerful novella will answer many of the questions that readers have about Jace, as well as give them a deeper glimpse into his character. I highly recommend it for those who like the Ilyon Chronicles, want to understand Jace better, or like stories that tug on your emotions.