HA: Jessica, welcome back to Homeschool Authors.
Jessica: Thank you so much Sarah for having me! I am super excited about this giveaway. I wish I could enter! 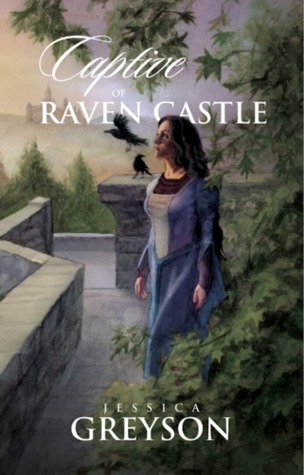 HA: What inspired Captive of Raven Castle?
Jessica: Captive of Raven Castle, was actually inspired by a picture of a castle, I saw it and my imagination took flight. Instantly, I saw a princess being taken up this winding pathway to a fortified castle against her will. Questions started buzzing my brain, what waited for her at the castle? What did she leave behind in the valley? Who was she? What if everything she believed that would happen to her once they reached the castle proved to be false? And if so...what did she believe? These were questions, I needed answers to. Having always wanted to try NaNoWriMo and having this inspiration in September, I thought I could use a month to fill out the details and plot out what happened to the princess with dark hair.


HA: What is the most encouraging review you have received so far on this book?
Jessica: Oh, that would be difficult to say. Sometimes short and sweet reviews where you know the writer meant every word touch the heart, and then when the writer goes on and on about it just make your day, then the completely unexpected ones that make you feel fabulous...sooo hmm…I am torn. So, I’ll list one of each and you may pick and choose at random dear reader.
Unexpected
Lovely and Long (and it talks about Taleon!)
Short and Sweet and it was really nice to know that this review came from my intended age target.
And the excellent with advisory


HA: When you are not writing, what do you enjoy doing?
Jessica: More writing? Spending time with family comes first, but hobby wise, I enjoy cooking, photography, needlework, and I pretend to dabble in art projects such as water colour painting. Obsessions would include Pinterest and daydreaming.


HA: What do you plan to read this summer?
Jessica: : Lots of text books, I’ll be learning TESOL, so that will be a fun adventure to say the least. Right now, most of my library is tucked away, but I have a few books by my side. A book about Lafayette, excerpts from diaries of girls from the revolutionary war, the Letters of Lafayette, The Abolitionist, Cato, Ember Flame and I am determined to get my hands on at least one of Rachel Heffington’s books before I leave, and make my way through at least part of a book series that by Shannon Hale that has been calling my name. Reread Mark of the Star and hopefully this list isn’t too ambitious.


HA: What are some of your favorite books of all time?
Jessica: Oh! So many good books to mention.
Ransomed by Elizabeth Ender.
Only A Novel by Amy Dashwood (both of these books are on my take with me everywhere I go list)
All of Lois Walfrid Johnson’s books. If you haven’t met her writing, I suggest you meet as soon as possible. One of my favorite authors of all time. No reserves on recommending her.
G.A. Henty, I love too many of his books to mention them all here but this man was one of my heroes.
Princess Academy, though this is frighteningly like one of my own that I have written, but then again. What idea is original? But her writing is so beautiful and fabulous, and for someone who usually doesn’t care for detail Shannon has a stunning way of drawing out details without making it boring and bringing the world to life through her fingertips.


HA: Can you give us a sneak peek into your work-in-progress?
Jessica: My current WIP is a project I am working on solely for myself and simply for the joy of writing. It’s called King and Queen. But even though I am writing it for myself and sharing it with a few select friends, I’ll share a peek with you. It’s so hard to pick out a favorite part because I really love these characters.
Her dark almond shaped eyes looked at him, the brown depths sparked with mixed feelings; her almost babyish mind didn’t comprehend all that was going on.
Kwan’s mouth twitched to the side, their father’s words running through his mind.
“Keep her safe, keep her safe and all will be well.”
His hand tightened on hers’, her hand squeezed back, her eye watched him trustingly, he was the only firm thing in their revolving world of constant change.
“Can you keep running?” He said filling his lungs with air once again, he hadn’t realized he had been holding his breath as the angry mob passed.
She only nodded, her dark locks bouncing with the vigor of her affirmation, her small mouth pinching tightly together.
How much longer can we run like this?


Some brotherly banter
“When I told you to bring me home something, I wasn’t expecting quite this, who did you kidnap.”
“I didn’t kidnap anyone, I am just keeping a promise, now take this one.” Jae felt herself being let down onto the other man’s arms.
“A girl?” The voice held a tremor of shock.
“Don’t be so surprised Jang.”
“Out of all the things you’ve brought home, there has never been a girl.”


My two favorite characters together.
As he tied it on, he found the other string around her neck. “What is this?” He pulled it and withdrew the small bag of rice she had tucked away.
“I kept rice...”
“Are you hungry?”
“For every day you were away.”
“You what?” asked Jang in a quiet voice.
“I kept a grain of rice for every day you were gone.”
His face did some sort of strange contortion, and he drew her to his lap.
“I missed you,” she whispered.
“And I missed you,” he answered, his voice almost inaudible. He buried two kisses in her hair, and Jae stretched her arms around his neck.
“That’s why I don’t want you to go away again.”
This time he laughed. “I already told you Little Woman...”
“I know,” she broke in, “you’ll come back. You’ll always come back.”
“That is right.”
She snuggled deeper, and Jang’s arms closed tightly around her.


HA: What should readers expect when they read Captive of Raven Castle?
Jessica: I believe I will let my review from Katherine say it, for they seem to find words better than I at times.
Jessica Greyson has done it again. Set in the same fictional world as her earlier book, Annabeth's War, Miss Greyson has once more managed to write a heroine who beautifully showcases feminine strength. This time, however, you might not recognize it immediately, and the story of the Princess Alexandra is a far different one from that of the Belterran sword master's daughter. The way Alexandra grows and changes throughout the book is delightful to see, and Taleon, as one of those demanding her growth, is one of my favorite characters.


It is Alexandra who I love most, though, and her struggle to understand the truth behind the lies that surround her will catch your imagination and your heart, and hold them both long after you finish reading. This is the story of a girl every inch a princess, and what happens after rebel forces kidnap her and turn her life upside down makes a book you won't want to miss.


Torture and true love, laughter and tears, sword fights and sacrifice: all are woven beautifully together into the unforgettable story of the Captive of Raven Castle.
HA: Do you have any final thoughts?
Jessica: Thank you so much Sarah for putting this together, and dear reader for your interest in my stories!

This week, get Captive of Raven Castle for only $0.99! Read it, review it, and have a chance to win it!