It’s difficult to come up with the ten most influential books I’ve read. Most books influence me in some way, whether in life, or my writing, or both. We are a rather bookish family, lots of our expressions, jokes, and topics of conversation have their origin in books. So it’s hard to narrow down the most influential. Here is the most accurate list I can currently think of.

1. The Bible
The Bible is certainly the most influential book I’ve read. It is where I get my beliefs, my worldview, my standards. Besides, it has some of the best true stories ever.

2. The Chronicles of Narnia by C. S. Lewis
The Narnia books are probably the most influential fiction books I’ve read. They made me love fantasy and appreciate a well done allegory. They definitely shaped my writing, and they have helped me understand many things. They are also the books out of which my sister and I have memorized and acted out the most scenes.

3. A Wrinkle in Time by Madeleine L’Engle
This was my first introduction into sci-fi, and, along with its sequel and E. T., my only experience with it until I was a teenager. But it influenced me in more ways than in just introducing me to science fiction. The planet Camazotz has shown me so many political and cultural parallels it’s scary, and I often find reason to quote, “Like and equal are not the same thing.”

4. The Elsie Dinsmore series by Martha Finley
I don’t think any author has influenced my writing style as much as Martha Finley. The kind of sentence structure, phrases, and words she uses come through in what I write, whether it’s a book or an essay. And even though the perfection of certain of her characters can be aggravating, I have found her books quite useful in teaching lessons to the girls in my Bright Lights small group.

5. Anne of Green Gables by L. M. Montgomery
This is another book that colored my vocabulary and influenced my style. I’m an awful lot like Anne, too. Except that she made me like red hair rather than hate it. This book also made me afraid of hair dye, because nasty green doesn’t appeal to me at all. Scope for the imagination is valuable. And “Anne” looks terrible without an “e.”

7. The Tale of Despereaux by Kate DiCamillo
This is the book that gave me my love of dungeons, especially ones that are dark, nasty, rat-filled, and easy to get lost in forever. Not that I want to be in one myself, but I find they pop up in my stories wherever possible.

8. Changes for Samantha by Valerie Tripp
I think this is the most influential of the orphan stories I’ve read, but it’s hard to tell. Anyway, this is one of the books that fueled one of my favorite childhood games: “Run Away from the Orphanage.” Like dungeons, there’s just something wonderfully dramatic about a terrible orphanage that I love.

9. The Witch of Blackbird Pond by Elizabeth George Speare
Despite taking place many years before and in a different town, this is the book that gave me my interest in the Salem Witch Trials. It’s such a good story, the kind I would like to write when I try my hand at historical fiction. It is also one of the many movies my fictional actress character stars in, so it influences my modern characters as well.

10. The Boxcar Children series by Gertrude Chandler Warner
I’m really cheating on this one, that’s a lot more than ten. But these are pretty influential, because when I started writing chapter books, these were the kinds of stories I wrote. The Boxcar Children were also my main source of reading material for a long time.

I could go on, but I already mashed a ton of books into ten. So, that’s my list. 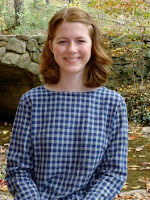 Morgan Elizabeth Huneke is a homeschooled high school student who lives in Georgia. She has enjoyed creating characters and writing stories since early childhood. Her other interests include reading, playing the piano and violin, and politics. She is the author of Across the Stars, a children’s sci-fi fantasy adventure, and The Experiment, a sci-fi/political adventure story for children.