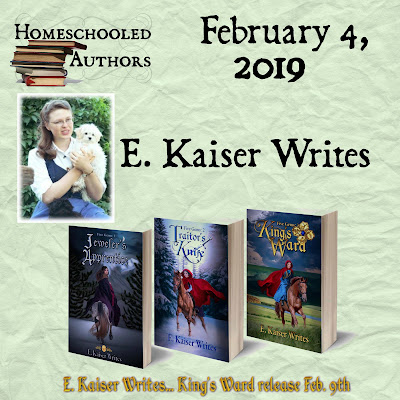 Welcome back to Homeschooled Authors, Elizabeth! What has been going on in your life?

Well, about two years of my creative life were pretty much swallowed up by a 14 hr. one way, move of the ranch operation; lock, stock and barrel, to a different state. So, we’re in Missouri now!
Lots more rain, which equals more grass... also more bugs, which I’m not a fan of. But I am closer to a lot of writer friends which I’d known online before, so have been able to meet in RL which has been great.
Also, worked out so that Realm Makers 2018 was in St. Louis, and writer friends were going, so I was able to attend and met a whole lot more online friends face to face, so yes, lots of new adventures!
I did keep plugging along with my writing during those two years, though I didn’t have time or energy to even think about releasing anything. So, now that the construction phase is wrapping up on the farm, my team and I have been able to focus on getting another book out to the reading audience. And I just want to say how thankful I am to every one of them who took the time to tell me they needed the next book in Fia’s journey, and that they’d enjoyed the earlier two in the Five Gems series. That was like streams in the desert for a weary soul!

Tell us about your Five Gems series?
I started the series with Jeweler’s Apprentice, which I wrote for my youngest sister, Abi, as a present when she turned 16.
Abi isn’t as voracious a reader as I was as a kid (I’d read anything, anywhere, and explored widely) and she’s a particular reader. So I knew I had to create something really different to keep her interest, since she deathly despises cliché’s and also will sit and ferret out a detail if she thinks its missing. (She rarely re-reads, but she read Anne of Green Gables twice solely in search of Anne’s age, and ended up roundly denouncing Lucy Maude Montgomery for never committing on that! J )
To avoid the trope-ish “sweet sixteen and everything happens” I made Fia nearly seventeen, and assigned her interest jewelry-making since I had some knowledge there. I also ended up sharing with her my personal experience with post-horse-accident fear of riding, and in a Renaissance-style fantasy period, that’s built-in conflict right there, because Fia ends up compelled to ride quite a bit! So all the horse-related parts are based on my own experiences, but of course she gets to do much more heroic things than I have in real life. Day dreaming, yes, probably about the same. J
I wrote it to be a stand-alone, and never thought it’d be otherwise. I was really burnt out by the time I’d finished it, my first totally completed novel, and I gave it to her with a sense of defeat. Sort of “Here, I made this for you, but you may not like it, I’m sorry it’s not better. It’s the best I could do.”
But to my surprise, she loved it, and devoured it right up. Then, to my great discomfort, she started hounding me for sequels. I was so burnt out, I never wanted to see any of it again!
But all that summer, she talked about what could/should happen next, and how we could improve JA’s plotline, and how to add this detail and that element, and by the following winter I sort of gave in and we started revisions on JA and also detailed note-taking on the series.
I often say, if not for Abi I wouldn’t have accomplished any of these, probably; because she really did become the impetus for my writing to result in books; both as whip-cracker and cheerleader.
And here we are... King’s Ward, third in the series!

I understand you are making some updates. Could you tell us about them?
When I released Jeweler’s Apprentice in 2011 after several years of revisions, I was really just trying to “fail forward” in the publishing world, very much an overwhelmed newcomer. Someone had told me about e-books, how I should just get out there and take that step, and so I did.
And in 2014, when we released Traitor’s Knife, we had a little better idea; but were still very much finding our way through formatting and cover design and all those overwhelming requirements; so while we were blessed to find some readers who latched on and became enthusiasts, it was more to their credit than our planning!
Now, seven years after that first release, our journey has really taught us so much, and we’ve sort of congregated an amazing, authentic, core readership we can go to and ask their advice, and then try to take it as best as we can. And we’ve really been enormously blessed through those relationships, creatively and personally; which we’d never have without first “plunging in at the deep end” with the first version, of the first book.
So, now for King’s Ward release, we’ve also done a re-edit of the earlier books, catching any little thing that slipped through previously, and a re-cover of them, too. So we’ve got a whole new look, they’re so pretty and we’ve tried to make them very representative of what you’ll find in the story. And also, a bit better branding, with a more cohesive appearance which we’ll carry on to the next books we produce as well.

I'm really excited about the third book. Could you give us a synopsis?
Yes!
“Knowing too many royal secrets, Fia’s position is compromised, so she is made a ward of the king and sent away yet again; this time into the grassland kingdom of Erlandia, north of Othira and as yet at peace.
But her journey amongst the horse folk takes unexpected turns and trapped within tawny walls she faces two men from her past... one she fears might murder her, the other may die of plague unless she wins the battle for his life.
With the Sunlight Stone traded for troops, how long will Erlandia’s peace last?”
So Fia is older now and more experienced, and she’s put into positions in this book where she really has only herself to rely on.
She started out as a “reluctant heroine”; I set her up to be sort of the Bilbo Baggins type, wishing she was back home with the kettle starting to boil. But through the course of events, she’s pulled into scary situations and she has to react, and that’s a question we all would like to know... if crucial events hinged on our actions, how would we perform under that sort of pressure?
Especially as youngsters, we really wonder what we’re made of, and although we all dream of adventure, I think a large part of us really hopes we never have to find out. J
But Fia does have to, and fortunately for those around her, she reacts heroically to the various dangers, and she does it only because she immediately sees the threats to those she cares about and is utterly unable to allow anything to happen to them. So she steps up and does whatever is in her power to protect her friends and family.
In King’s Ward, she’s immersed into a new kingdom, Erlandia; an environment greatly inspired by Rohan in Tolkien’s work, and also the plains horsemen of Hungary. I loved mining the rich traditions of the Magyar-culture, including the “three up, Roman riding” as a competitive event for the Erlandian festival; which is something still done by Hungarian horsemen showing off their skills.
All this I translated via my own experiences growing up a’horseback in Montana, Wyoming, Nebraska, and a bit of the Dakotas, so that was a lot of fun to get to really celebrate a grassland, horse-centered way of life.
And of course for Fia, this is a bit distressing, so there’s that, too! J

Where can people go to learn more about you and your books? (website, social media links, newsletter)
I love visitors, and I even more love notes, so everyone, please don’t hesitate to connect with me on any of the platforms. J

What is your favorite quote from the Five Gems series?
Oh, that is tough. That’s an aspect of being a “discovery writer”, where you don’t know what it’s going to be until you write it! It’s easy to surprise oneself this way!

"She wished she could change things, put a stop to the war that uprooted families and scattered friends. But something she’d read in a book echoed in her memory.
“You go forward. There is only one way to live life and have it retain any real worth. It’s true what they say: The only way out, is through.”
Then through was where she would have to go."

But some of my favorite lines are descriptions...

"The inhabitants seemed a cheerful, carefree sort, but their very congeniality was heavily laced with the stubbornness and determination to survive no matter what the sky might throw at them. There was an almost reckless bravado in the eyes of the young, as if growing up in the face of all that emptiness had expanded their impressions of self to stretch out to both horizons and take it all in as part of their soul."

Some of the most humorous are from the villain's perspective... things like;

"It had always amused him to escape certain death. [...]
Lady Luck had always been his very favorite flirt."
And...

"[...]as he headed out for the pass that would see him in fresh territory.
Territory where no one knew him… yet."

Any final thoughts?
Writing Fia’s adventures as she grows into adulthood is really sort of a waltz between what I know now, and the things I struggled with growing up. It’s got a beautiful, fantasy setting and thrills to keep things exciting, but I always want to be representing real aspects of life which a reader can absorb and be helped by if they happen to need that.
I find my ‘center’ creatively when I aim to reach who I used to be, who Abi used to be, the sort of book those versions of ourselves would have enjoyed, but also been encouraged by.
And when I hear from readers that they loved the books, that is just the best, indescribable, feeling; because I know that these readers aren’t being served by the current publishing world, and I’m able to take my dissatisfaction with the books commercially available, and turn that into a driving force to create something that others have their need met through, and that’s a real blessing.
This world is filled with discouraging things, so to find little jewels of beauty and connection, the darkness makes such gems shine all the brighter for it. J