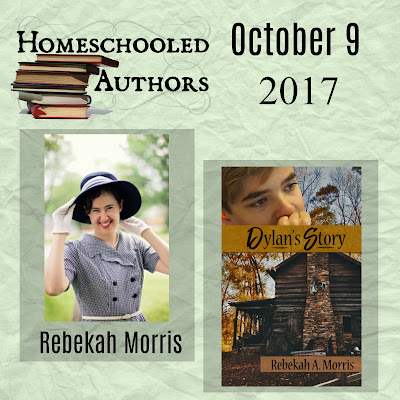 Rebekah, Welcome back to Homeschooled authors. Tell us about your latest book.
Hi Sarah! Thanks for letting me join you today. It’s been a while since I’ve been here.

Here’s the synopsis for Dylan’s Story.
Terrified of telling too much, ten-year-old Dylan Sedano wishes his little sister, Fern, would stop talking. But when army reserve officer, Scott Wood, and his wife Autumn, tell Dylan that God is ready to help him, Dylan isn’t buying. If God did care for them, why hadn’t He been there months ago when the trouble started and his dad disappeared?

It’s a story about faith, trust, and forgiveness. There are two different perspectives: Dylan’s and Autumn’s.

What inspired you to write Dylan’s Story?
It wasn’t my intention to write it. But after writing what I thought was a short story for my blog, my readers demanded to know what happened next. They were very insistent that the story wasn’t done. So I started writing again and the story began to take shape. I don’t know if I could say any one thing inspired me more than others beyond the needs my characters had, but God had a plan for it.

Did you have to do any special research for this story?
I actually did. Usually for a story set in fairly modern times (1980s) I have to do limited research, but something came up that I wasn’t expecting. I’m not the kind of person who just randomly researches strange things, so this was quite unusual for me. I got to do research on the Mafia. It was rather interesting. Not something I typically read about, but yeah, that was most of my special research. :) I had to find out how it worked, and where it was, and many things about it. But don’t worry, I don’t tell you everything I found out. :)

What was the hardest part of writing Dylan’s Story?
I would say the hardest part was writing what had happened before the story started because I didn’t have a clue when I went into the story. Then, when I did find some things out, I didn't want to go into too much detail, yet I had to have enough so the story fit together. There was a lot of “Why?” “How?” and “Could it have happened?” asked during that time.
Another thing that made writing this story a bit of a challenge was that I was also working on a couple other stories at the same time about totally different things in totally different time periods. Switching from one to the other so often was a bit stretching for my brain.

What was the most fun?
Autumn’s perspective. I’m not completely like Autumn, but it was fairly easy to put myself in her shoes and know what she was thinking or feeling. Another thing was deliberately putting no coffee in this story. Yep, I made it a point to keep coffee out of it. :) But I’ve been told I made people hungry. You’ve been warned!

Where can people buy it?
Dylan’s Story can be purchased on Amazon in paperback or Kindle, or on Light of Faith. If they want a signed copy, Light of Faith can get it if you just ask.

Any final thoughts?
I hope that anyone who reads this book will be reminded that no matter what happens, God does have a plan. And it’s better than we could have dreamed.
I’m also looking for a few reviewers, so if you are interested in reading and reviewing this book, let me know. I will take the first 10 people.
Posted by Sarah Holman at 5:38 PM

Email ThisBlogThis!Share to TwitterShare to FacebookShare to Pinterest
Labels: Interview, Rebekah A. Morris