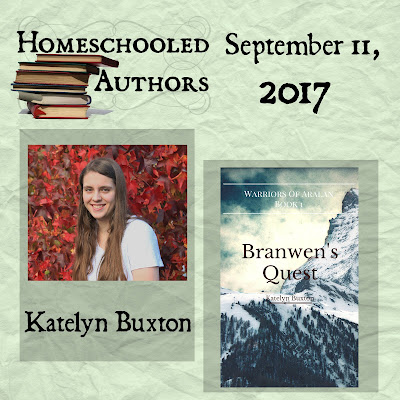 Katelyn, welcome to Homeschool Authors! Tell us a little bit about yourself.
Hi, thanks for having me! I'm a Christian, born, raised and homeschooled in southern Oregon. I started writing when I was about fourteen, but it wasn't until I graduated in 2015 that I was able to self-publish the first book in the Warriors of Aralan series, Branwen's Quest. Besides writing, I enjoy reading, spending time with friends and family, listening to music, watching movies, baking cookies, and helping out at my church.

Everyone’s homeschooling experience is different. What do you think made yours unique?
Well, I was homeschooled through all twelve grades, but in my high school years my mom allowed me to choose which classes I wanted to take. For example, I took entomology for science one year, and wrote a novel for English in another.

How did being homeschooled prepare you to write?
It prepared me to write by giving me a firm understanding of the English language, and fostering my love of reading. Both of those things have played a key role in my choosing to be an author.

What caused you to start writing?
A school assignment that called for me to write the first chapter of a story, and end it with a cliffhanger. Up until that point I actually hated writing, but that cliffhanger hooked me. When I read it out loud to my family, they weren't the only ones that wanted to find out what happened next—I did, too! So I wrote the next chapter, and the next, until that first story was finished. After that, I couldn't stop.

What inspired Branwen's Quest?
Honestly, nothing but a sheer desire to write something. At that point, I had fallen into a really bad habit of not reading, and I was running low on inspiration. My sister and I cooked up the basic plot of Branwen's Quest one night, and the rest is history.

Would you give us a synopsis?
When the royal herald came announcing a mandatory Tournament of Warriors, Branwen was the last one to get excited. Sure, she was a good enough archer, but why should she be forced to go to the tournament just because the king said so? She had nothing to prove! Yet when she got there her competitive spirit took over and she succeeded—enough so that she was singled out by the king to take a difficult journey with three others who were as different as night and day from each other. Why? To recover the king and queen's missing crowns. Will they ever be able to overcome their differences and get along to complete their mission, or will they fall prey to an unexpected danger posed from within?

Who will enjoy Branwen's Quest?
Branwen's Quest is great for anyone that enjoys a clean, fast-paced fantasy read, but twelve to fifteen is the target age range.

Do you plan to write more books?
Oh, always! Currently I have written ten books in the Warriors of Aralan series, with seven of them published, and at least one more on the way.

Where can people connect with you online?

Do you have any final thoughts?
Only this quote, which I would like to share with every Christian writer. It's something I stumbled upon not long after I became published for the first time, and I actually have it set as the wallpaper on the computer I use for writing. It helps keep me focused on what's important—not selling books, as nice as that is. It's about serving Him.
"He is at work on your behalf, not to make you a best-seller, but to make you the best tool for His work. As much as we'd like to think this whole gig is about selling books, it's not. It's about obedience. About writing, because that's the task He's given us. It's about seeking to serve Him and others through the gifts He's given us." ~ Karen Ball
Posted by Sarah Holman at 3:00 AM