Book Review: The Rise of Aredor by Claire M. Banschbach 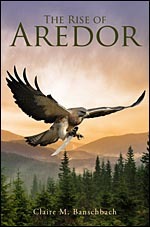 Buy it Here
Age Appropriate For: Ages 13 and up for violence
Best for Ages: 13 and up

Description: Lost in a foreign land and separated from his family, Corin does his best to survive as a slave in the household of a Calorin lord. With newfound friends he fights for survival in ambushes and wars. For one act of bravery, he is awarded his freedom and returns to a home that has been invaded and ravaged by the Calorin armies. When Corin sets foot on Aredor's shores, he has one goal in mind: find his family. He is driven into the forest, where he is reunited with childhood friends. From the shelter of the woods, they begin a spirited rebellion against Corin's former cruel master, who now holds sway over Aredor. Follow Corin's path in his quest to free his imprisoned brother, find a father who has vanished, and ultimately free his country in The Rise of Aredor.

Sometimes it is really hard to do reviews on debut novels, and this was one of those hard ones. Debut novels often show promise, but leave lots of room for improvement. This book shows a lot of promise, and I really look forward to seeing this author’s books in the years to come.

The first third of this book was very choppy and poorly written, but after about the first third, the author hit their stride and it began to improve. By the end of the book, I saw a lot of promise and really hope that this author will continue to write.

The story itself was good, even with the choppy writing. A prince who is captured and sold into slavery and treated poorly is a great start to a story. When the prince is sold again to a kind master who wants to teach him to fight, it gets even more interesting. When he finally gets a chance to go home, you don’t want to stop reading.

Even though the characters weren’t deep, they were likable. Corin and his many adventures kept me interested in turning the pages. He was a very likable hero who overcomes every challenge he faces.
The strongest point of this book was the male characters interacting. There were many jokes and fun parts between Corin and his friends. The male friendships were very masculine, which was very nice.
There was a lot of talk of wars and blood in this book, but nothing that was so graphic as to make me feel sick. There wasn’t any romance, nor was there a message of faith.

I recommend this to those who like non-magical fantasy, adventure stories, and strong male leads.

I received this book from the author in exchange for my honest review. I was under no obligation to write a positive review. The opinions in this review are entirely my own.
Posted by Sarah Holman at 3:33 PM